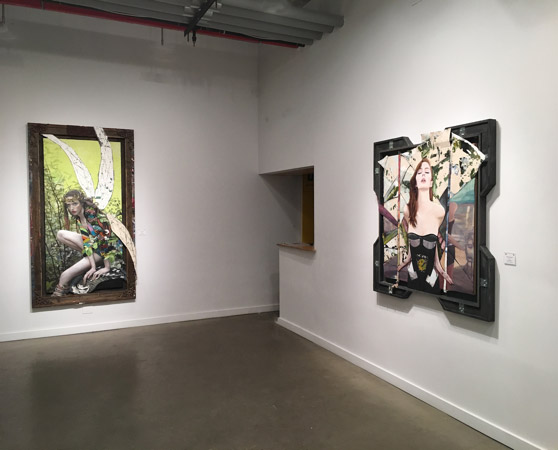 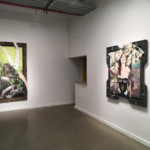 In “Dimensions Variable” Gortner hand sculpts each surface using wood, foam, staples, canvas and acrylic paint before using oil paint to realistically render the figure. The results transform the expectations of the two-dimensional surface into a beguiling three-dimensional composition. “Dimensions Variable” also features the artist’s hand-constructed frames, suggesting a threshold for the subjects of the paintings to come forward, into ‘real life’, as they visually oscillate between the foreground and background of the illusionistic painting. Within this imagined portal, Gortner sets up narratives of powerful beings and parabolic plot twists that are purely visual. The paintings’ conceptual makings and process, however, tell another story.

Many of the allegorical elements in and around Gortner’s primary figures are parts from other artists’ paintings; segments that Gortner cuts out, arranges, staples and glues as a foundation upon which he paints. We see repurposed paintings of knives, plucked-out eyes, cut abstracted swaths, questionable flora and fauna, blood runs and severed heads. While the work seems innocuous at first glance, the repurposed elements of the artwork reveal a more captivating conceptual leap allowing a broader conversation between the viewer and the picture plain.

Gortner’s process not only reclaims forgotten paintings but also incorporates the ideas, images and emotions noticed in his everyday life, transforming the stimuli into an actively imaginative composition. Gortner states, “Art is always alive and changing and cannot be considered ‘finished’ in its totality. Artwork continuously changes after it leaves the artist’s studio. It is bigger than the confinements of its form. Its initial concepts are continually reconstructed or re-contextualized by curators, collectors and viewers theoretically transforming the art within their imagination.”

In a sense, “Dimensions Variable” is a collective meta-sculpture of discarded painting energy that evidences the artist’s deftness of hand, supported by elements extracted from other artists’ paintings and found objects. It is in this collaboration that Gortner draws his boundaries, asking the viewer to suspend traditional expectations of art making (i.e. that each painting should be “original” and authored in its totality by one artist) and instead consider how this connectivity to the past and present expresses a new authenticity and content ownership. Gortner finds freedom and truth in this new presented order, the imagined “Dimensions Variable” of creation.

James Gortner was born in Orange County, CA in 1977. He received his M.F.A. from Columbia University in 2010 and his B.A. from Hawaii Pacific University in 2001. Gortner has exhibited his work in the United States and in Germany and is currently featured in the 2017 edition of New American Paintings (North East). This is his third solo exhibition with Lyons Wier Gallery. James Gortner lives in New York and works from his studio at Mana Contemporary in Jersey City, NJ.