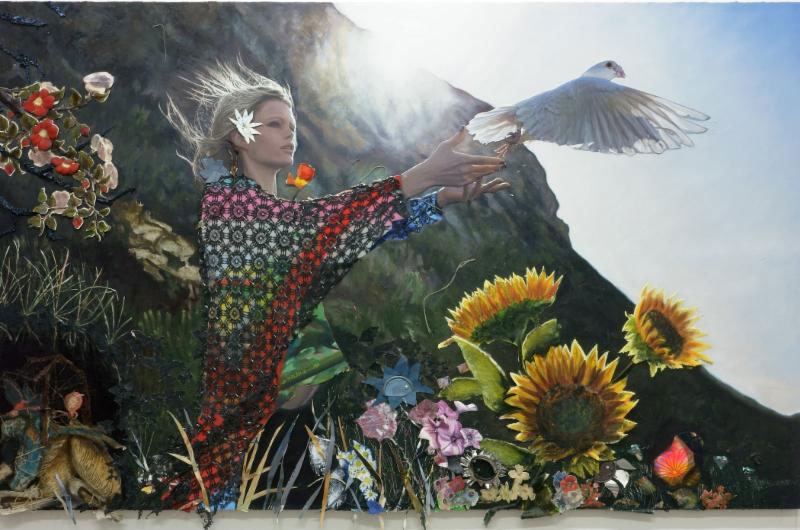 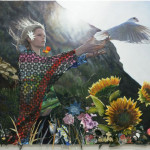 Lyons Wier Gallery is pleased to announce “Transformer,” a new solo exhibition by James Gortner. Opening on September 10th, “Transformer” continues Gortner’s exploration of artistic production through works that incorporate both original and found elements. However, unlike his last exhibition whereby he assembled and painted upon found paintings in their entirety, in “Transformer” Gortner cuts and collages pieces from an even wider range of found paintings and discarded objects, incorporating them into a new composition.

By layering the face of his panels with cut canvas, pieces, and parts of pre-existing found work, Gortner affects a beguiling surface beyond the two-dimensional picture plane. “Transformer” is, in a sense, a collective meta-sculpture of discarded energy that evidences the artist’s own deftness of hand, supported by elements extracted from other artists’ paintings and found objects. It is in this collaboration that Gortner draws his boundaries, asking the viewer to suspend traditional expectations of art making (that each painting should be original and authored in its totality by one artist) and instead consider how collaboration – whether blind or solicited – expresses a new authenticity and content ownership. Each work in “Transformer”, much like an electrical transformer is, therefore, an energy mediation between the original intent of found work, and the new narrative of Gortner’s creation.

The visual nuances of Gortner’s work contribute to the surrealistic and visionary nature of the narratives, and compound the impact of his compositions. “Transformer” embraces the artist’s penchant for allegory, creating visuals ranging from a woman sprouting ram horns to a well-rendered man with wings and a longbow riding an abstracted dragon. In another composition, a woman sits in what could almost be considered a natural landscape, an idea that is sublimated by the elements of birds, moon and lake that are collaged into the painting’s foreground and background.

It is this oscillation between action and stillness, known and unknown, real and illusory, natural and unnatural, original and found that makes Gortner’s paintings so captivating. All combined, “Transformer” brilliantly balances authorship and stewardship, and evidences the evolution of artistic process. The work embraces a unique visionary narrative – an idiomatic manifestation that James Gortner has made all his own.

James Gortner was born in Orange County, CA in 1977. He received his M.F.A. from Columbia University in 2010 and his B.A. from Hawaii Pacific University in 2001. This is his second solo exhibition with Lyons Wier Gallery. Gortner lives in New York and works from his studio at Mana Contemporary in New Jersey.