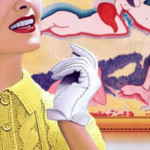 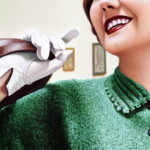 James Rieck’s newest body of work, “Rapture,” mines that euphoric moment of cognition… that split second when understanding and emotions are born. Using models extrapolated from 1950’s and 60’s commercial magazines, “Rapture” juxtaposes an idyllic midcentury moment of bliss spurred on by the artwork that is on public display. Rieck’s compositions combine highly sexualized historical masterpieces such as Matisse’s “Le Bonheur de Vivre”, Pierre-Auguste Renoir’s “Bather Drying Herself”, and Andy Warhol’s “Marilyn Monroe”, with an overtly ecstatic viewer. Replete with innuendo and bravado, “Rapture” captures the viewers’ profoundly private moment of sexual awareness and desire all the while on public view.

Rieck states, “It’s easy to lose yourself in a painting, or any form of art, as a means to escape from the world or the self. There is no limit to where it can take you, if you let it. Museums and art galleries are designed for you to let yourself ‘go’ in public. They are vehicles for the art experience of private passions in shared settings. As art critic Jerry Saltz said in his reference to spending the night in the Guggenheim Museum foyer for Carsten Höller’s “Revolving Hotel Room” (2008), “I’ve always wanted to have sex in the museum. To me museums are ecstasy machines, places to experience rapture, and the real thing is the real thing.” I’ll leave it to you to picture Mr. Saltz having his way in the museum, but we can all want to feel the real pleasures that come from art and the places that hold it.”

James Rieck earned both his MFA and his BFA from the Maryland Institute College of Art and attended the Skowhegan School of Painting and Sculpture and the Glasgow School of Art, Scotland. Rieck’s paintings have been exhibited across the United States. Museum and group shows include: “We Could Be Heroes: The Mythology of Monsters and Heroes in Contemporary Art” at Brigham Young University, Provo, UT, “Size Does Matters,” curated by Shaquille O’Neal, the Flag Foundation, New York, “As Others See Us: The Contemporary Portrait,” Brattleboro Museum, VT, and at the Corcoran Museum, Washington, DC. His work is present in the Burger Collection, the Bollag-Rothschild Collection, Switzerland, and the Chadha Collection, The Netherlands, among others. James Rieck lives and works in Los Angeles and has been represented by Lyons Wier Gallery since 2003.