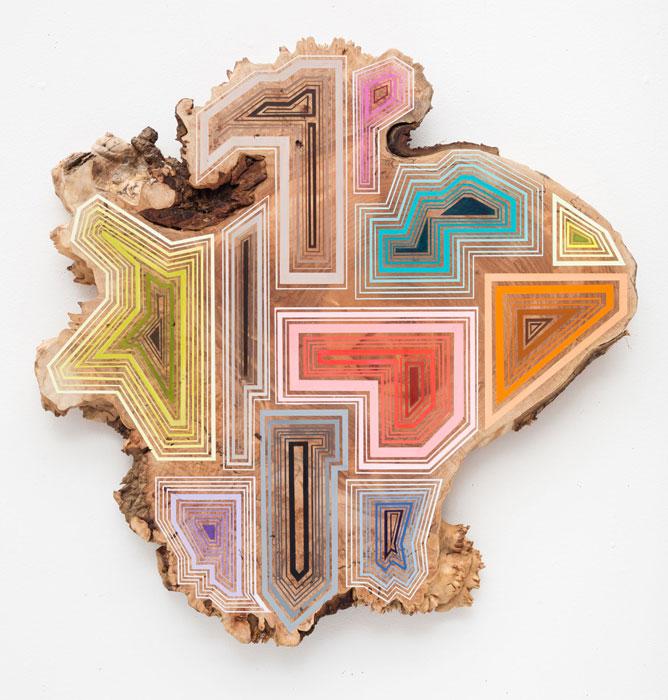 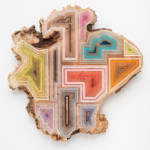 Middlebrook’s planks (from either vertical or horizontal cross sections of trees) bridge divides between painting and sculpture, surface and ornament, and point abstraction back to its roots in naturally occurring pattern. His paintings progress radially and radiantly, mimicking their biological substrate. They reference emergent processes like honeycombs, crystal lattices, the buildup of meander scars in a changing watercourse, and of course the growth of the trees themselves.

A pair of new steel sculptures extrudes line and pattern into three dimensions and returns it outdoors.

In tracing or crossing the rings of a tree, Middlebrook’s lines describe its life, and expand to fill the space of its existence. One is reminded of Kim Novak in “Vertigo”, tracing her real and imagined lives on a section of sequoia. Seasons build upon seasons, and behind each line is another line, another strata, another afterimage. To quote one of Middlebrook’s own titles: “inside each tree is another tree.”

Dendrochronology is as much a marker of abundance as it is a reminder of finitude. Middlebrook’s work frequently acts as a critique of human technological hubris by recycling its remnants into a reminder to slow down and look. Guided by nature but mediated by industry, they balance the raw and the cooked. Their organicity is a result of their relationship with industry. The sawmill blade cuts a Gordian knot of human-nature entanglement.

Middlebrook’s (born 1966, Michigan) first solo project with the gallery was in 2015. He has had many solo exhibitions, including “My Landscape”, at MASS MOCA in 2013. His work is in numerous museum collections, including the MCA, Chicago; the Museum of Modern Art, New York; the Whitney Museum, New York and the New Museum, New York. He received his BFA in 1990 from the University of California, Santa Cruz and his MFA in 1994 from the San Francisco Art Institute, California. He attended the Whitney Independent Study Program in 1994-95. This year he will install a commissioned mosaic piece for the new federal courthouse in Mobile, Alabama. Middlebrook lives and works in Hudson, New York.