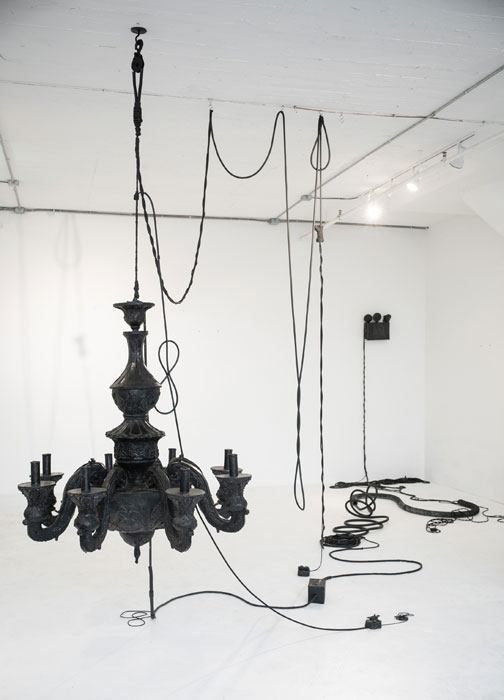 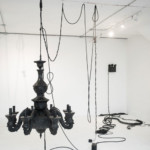 Marc Straus Gallery is proud to present an exhibition of seminal works by Jeanne Silverthorne, the first of a new on-going series of thematic exhibitions curated specifically for the gallery’s fourth floor loft space by gallery Director, Ken Tan.

“Jeanne Silverthorne: From Darkness” will feature her 1994 “Untitled (Chandelier)”, not exhibited publicly in fifteen years. Featured in dialogue is a new sculptural piece, “Frankenstein”, 2018, created for the show. Both works will occupy the newly built fourth floor loft space of the Lower East Side gallery.

Jeanne Silverthorne is one of the preeminent artists who came to prominence in the 1990s as a sculptor who favored an unorthodox medium: rubber. For the next three decades, Silverthorne created work almost invariably in industrial-grade rubber, favoring a laborious, old-fashioned process that requires numerous separate casts for a single work. While her sculptures resemble ordinary objects, often derived from her own working studio, they acquire new meaning when executed in unexpected scales and in her preferred monochromatic colors. Thus, rubber sculptures such as light bulbs, task chairs and electrical wiring components do not work – they are the apotheoses of the dysfunctional.

“Untitled (Chandelier)” was exhibited in 1994 for Silverthorne’s inaugural one-person exhibition at McKee Gallery, New York. The immense tableau comprised a large, black Baroque-styled chandelier, with a ganglia of wire tubing connected to an EXIT box. They are made of resin and rubber; they do not work. The chandelier is a symbolic artifact of the Age of Enlightenment, a period in 18th century when individualism and rationality were championed-propelling a tumult of scientific and societal advancements. However, the same pursuit for progress is a double-edged sword; for example, it made possible Robespierre’s “Reign of Terror” that ‘rationalized’ remorseless bloodshed. Now we face contemporaneous moral dilemmas in the field of genetic engineering and artificial intelligence-Silverthorne, through her unique enigmatic aesthetic, perhaps is suggesting a deeper reflection on humanity’s past hubris.

One of the most brilliant works from the “Enlightenment” is the classic novel by English author Mary Shelley, Frankenstein, that tells the story of a scientist Dr. Victor Frankenstein who creates a sapient creature only to shun his creation in abhorrence and hate. This polarizing horror tale has been a life-long fascination for Silverthorne, who as a result produced a tome of a conceptual sculpture: a 220-page book, its black rubber cover embossed with “FRANKENSTEIN.” What appears to be an empty book is deceiving. Jeanne has not only laboriously hand-written the first volume of Frankenstein in archaic script; she did it entirely in invisible ink. Thus, its contents can only be seen in the dark under ultraviolet black-light.

This exhibition is accompanied by a fully illustrated catalogue, chronicling Silverthorne’s career milestones, with essays by Glenn Adamson, Sue Canning, Ken Tan and an interview with Saul Ostrow. Conceived and produced by Ken Tan, the catalogue design features a unique glow-in-the-dark element, such as a second distinct set of text written in the artist’s own hand, and printed in invisible glow-in-the-dark ink within the catalogue’s contents.

Jeanne Silverthorne (b. 1950, Philadelphia, US) received a BA and an MA from Temple University. For over two decades she was represented by McKee Gallery up to the retirement of David and Renee McKee in 2015. Her one-person museum exhibits include PS1, New York, the ICA Philadelphia, Phillips Collection in Washington D.C., and Whitney Museum, New York. In 2017, she was awarded the Guggenheim Fellowship. Her work is included in many major museum collections, including MoMA, NY; MFA Houston, SFMOMA, CA and the Whitney Museum, NY. In October 2017 she exhibited at The Addison Gallery of American Art in Andover, MA. Jeanne Silverthorne teaches at School of Visual Arts (SVA), NY and is represented by Marc Straus.