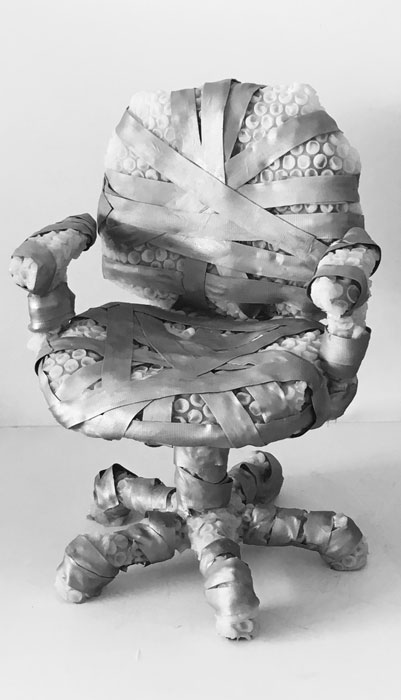 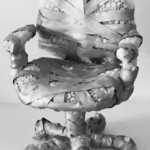 Marc Straus is pleased to present the inaugural solo exhibition of American sculptor Jeanne Silverthorne at the gallery. For more than three decades, Silverthorne has taken the studio as her subject. For Silverthorne the worksite and its contents, including herself, become inextricable metaphors of existence, age and decay.

Silverthorne creates sculptures almost invariably in industrial-grade rubber, favoring a laborious, old-fashioned process that requires numerous separate casts for a single work. Her sculptures of everyday items mimic reality, but colored and/or changed in scale they acquire new meaning and unexpected associations. Thus wires and conduits may now suggest arteries or veins flowing with life, light-bulbs symbolize creativity, and chairs that are worn out evoke human presences. Yet her bulbs do not light and her chairs are not supportive – they are the apotheoses of the dysfunctional.

Such is the case with “Wrapped Task Chair” (2016). Silverthorne’s actual work chair, one that had been in service for several years and, now decrepit, is reanimated into a symbol of fragility and healing. Yet, the engulfing bubble-wrapping and protective bonds of duct tape also portend suffocation and servitude. In another charged and personal work, “Trash Can with Broken Wood with Nails” (2017) could be Silverthorne’s purge of the unwanted as well as renewal and progress.

The melancholy of the work is offset by lighter moments, as rubber itself, being spineless and floppy, is facetious in nature. In “Suicidal Sunflower” (2014), one of her most complex and loaded works, a gray and white sunflower finds its own weight too heavy to bear and attempts to hang itself from a dangling black bulb. The sunflower is likely a stand-in for the artist and the bare bulb is a fixture in countless studio representations from Picasso to Philip Guston.

In time the studio will deteriorate, its objects will go to seed. Nature always reasserts itself – it invades through the cracks of the aging studio; weeds and insects appear in Silverthorne’s series of anachronistic floral paintings. Enlarged many times, “Self-Portrait as a Fly with Glasses” (2017) is a poignant self-portrait where the artist is at her most vulnerable. For several works Silverthorne casts an exquisite unique rubber crate into which the sculpture may be safely stored and shipped. A sculpture itself, the crate’s ironic utility is perhaps Silverthorne’s attempt to confront entropy.

Gaining prominence in the early 1990’s in New York, Silverthorne was one of the material-focused sculptors who favored impoverished and unorthodox media. In response to the austere forms of Minimalism (a male-dominated movement), she was among a group of important female artists for whom Eva Hesse and Louise Bourgeois were of critical importance, who championed the hand-made, the personal and the ephemeral. Yet her work perhaps aligns closer with Robert Gober’s “handmade readymades” – Silverthorne’s rubber sculptures are physical poems of tragedy, humor, hope and humanity.

Jeanne Silverthorne (b. 1950, Philadelphia, US) received a BA and an MA from Temple University. For over two decades she was represented by David McKee Gallery up to their retirement in 2015. Her one-person museum exhibits include PS1, New York, the ICA Philadelphia, and Whitney Museum, New York. In 2017, she was awarded the Guggenheim Fellowship. Her work is included in many major museum collections, including MoMA, NY; MFA Houston, SFMOMA, CA and the Whitney Museum, NY. In October 2017 she exhibited at The Addison Gallery of American Art in Andover, MA. Jeanne Silverthorne teaches at School of Visual Arts (SVA), NY and is represented by Marc Straus.