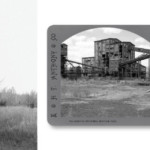 Robert Mann Gallery is pleased to present “Jeff Brouws: Typologies, Projects & Portfolios 1991-2016”. Practicing what he terms “visual anthropology” Brouws, over the past twenty-five years, has persistently pursued a body of work that closely examines the evolving American cultural landscape. Taking inspiration from the “anonymous sculpture” studies of Hilla and Bernd Becher, the New Topographics Movement, and the deadpan artist books of Ed Ruscha, Brouws has produced visual archives – focused mainly on architectural forms – that forge his own photographic territory. Without romanticizing his subject matter, the photographs subtly ask us to consider the economic or social forces that have shaped the built environment – from its initial development to its eventual demise.

In 1991, for his “Twentysix” Abandoned Gasoline Stations project, Brouws began documenting elements of the evolving highway landscape: service stations owned by independent operators (instead of multi-national corporations) were being challenged by new EPA mandates to replace aging underground storage tanks or risk closure. Many, sensing government collusion with Big Oil (as later substantiated by the Los Angeles Times), were unable to upgrade and forced into abandonment. Brouws recorded them at this moment of discard. While doing this project Brouws simultaneously became aware of Ed Ruscha’s book “Twentysix Gasoline Stations” from 1962. Referencing Ruscha’s title (with a slight modification) he created a body of work reflecting a changing car culture environment vastly different than the era depicted in Ruscha’s photographs – where fuel was cheap, the open road beckoned, and friendlier global relations prevailed. This early project became an act of art “appropriation” that also signaled a growing awareness (for the artist) that every physical structure in the man-made environment is a “tell” that references political, economic, or social relations.

For his Freshly Painted (Tract) House series, Brouws – who grew up in Daly City, California (a town made famous by Malvina Williams’ song “Little Boxes On The Hillside”) – returned to his former neighborhood to document yet another cultural shift: an influx of Asian immigrants moving into a former all-white enclave who painted their houses in colors then unfamiliar to a pre-Martha Stewart, middle-class America. While mildly humorous the house photographs nonetheless denote an important moment in the history of suburbia, where one ethnic group attains home ownership to gain a toe hold on the American Dream as an earlier group, further up the economic ladder takes “white flight,” moving to the exurbs on the periphery.

His latest “Coaling Tower” series begun in 2013, is an homage to the Bechers as well as a continuation of his life-long interest in the railroad landscape, its environs, and sites of de-industrialization. These monolithic structures are “retired-in-place” relicts from railroading’s steam era still standing along main lines and brownfields throughout the Eastern United States and Canada. In our modern times, where technological marvels are celebrated as they become faster and more compact, these oversized concrete behemoths, while now moribund, remind us of earlier technologies and earlier architectural achievements built on a grander scale. To capture these monuments of the Industrial Age Brouws used contemporary mapping technology, meticulously researching the locations of 105 extant examples via internet sites and Google Earth satellite imagery.

Over the last several years Brouws has also been studying late nineteenth and early twentieth century photography and the presentation formats of that era, especially the stereograph. Brouws writes of this project that he calls the American Industrial Heritage Series:

The American stereograph served a critical purpose in educating the public, introducing a new visual culture as a way to know what lay beyond their doorsteps, bringing them intimately in touch with the material world. While I have had no desire to employ traditional, two-lens stereographic camera technology in the making of these images, I nonetheless wanted to create a piece that compellingly approximates the object-ness of the two-image stereograph card that references their historical and cultural function. These paired photographs, then, are “non-optical”; they do not produce a three-dimensional effect. The text and period fonts appearing on the “cards,” contextualize the images by making references to antecedent stereographic publishing companies, or government sponsored, nineteenth century U.S. Geological Surveys. The present-day photographs are views of deindustrialized sites, or remnant-building types (or industrial forms) developed during the early twentieth century.

Presenting these photographic images within this faux-stereograph framework (including drop shadow, period type, and borders showing age discoloration) creates an optical illusion – a convincing trompe l’oeil effect – that challenges the viewer to consider what they are looking at. These are at once historical photographs and contemporary images. Utilizing available software and modern printing technology to make an “artifact” that looks antiquated but isn’t, creates an ambiguity that hopefully engages the viewer for more than that split-second of visual consumption that has become our modern habit.

Over the course of Jeff Brouwsʼ career he has created an encyclopedia of imagery devoted to preserving the abandoned artifacts of our heritage. Coaling towers of the railroading’s steam age stand as monuments to our past engineering ingenuity. A forgotten photographic medium is redefined in the twenty-first century. By exploring these subjects in these ways Brouws has created a visual anthology of technological, photographic and architectural history.

“Typologies, Projects & Portfolios” is Jeff Brouwsʼ sixth exhibition at Robert Mann Gallery. His photographs are included in the permanent collections of The Whitney Museum of American Art, The Nelson-Atkins Museum of Art, The J. Paul Getty Museum, and others. His monographs include “Approaching Nowhere” (2006), “Readymades” (2003), “Inside the Live Reptile Tent” (2001), and “Highway: Americaʼs Endless Dream” (1998). He is also the co-editor and co-creator of “Various Small Books: Referencing Various Small Books” by Ed Ruscha (2013, MIT Press). Born in 1955, Brouws lives in Stanfordville, New York.