Jennifer Coates – All U Can Eat 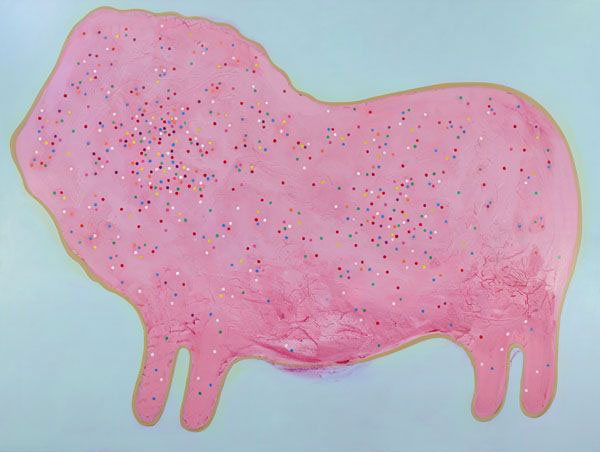 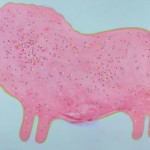 Freight + Volume is pleased to present “All U Can Eat”, an exhibition of recent paintings by Jennifer Coates that depict processed foods as devotional icons, using food as a vehicle to explore a variety of approaches to paint handling: from dense, detailed fields of marks and patterns to expressionist gesture and spills, familiar foods assert their physicality and transcendent radiance.

Psychedelic visionary Terence McKenna has said that it was the invention of agriculture that spelled doom for the human race. Hoarding, defending surplus and a sedentary lifestyle encouraged dominance and hierarchy, and a certain aggressive territoriality. The domestication of wild plants on farms and the accumulation of grains in large stone silos has led, 10,000 years later, to a large variety of highly processed, mass produced “food” that at times, chemically speaking, has more in common with the packages that contain it than with actual food.

“All U Can Eat” is a Depression era concept that delivered a self-service buffet of low quality for $1. In the postwar years, “All U Can Eat” was amped up into an emblem of overconsumption. Industry was repurposed from wartime production to all manner of unnecessary things, and we wound up with too much choice on the buffet table and in the supermarket. While we consider our piles of vegetables out of season, unwrap symmetrically sliced, curiously shaped breads filled with processed cow and pig parts, or bite into an intricate yeasty spiral decorated with a spray of sweet icing, we engage, unthinkingly, in daily satiation rituals. But consider the negative consequences of American gluttony – as bad for the biosphere as for the gut, most of the foods available today as items of convenience and guilty pleasure arrive to us at a low price but a high moral cost. Your candy bar was likely made by child slaves. Your avocados were harvested by a migrant laborer who breathes in pesticides that harm her unborn baby. As you pile up your booty at Costco, millions of people are facing famine elsewhere in the world. The most nostalgia-filled comfort foods are the ones that hurt the most: they give you gas, they deplete the soils, and their packaging winds up in ocean garbage gyres.

Yet convenience food also possesses a magic that harkens back to an earlier time. Ice cream cones and popsicles are like portable rock art from the Paleolithic era: instead of carrying around a small figurine as a talisman, we put ours on a stick and eat it, forgetting its transformational powers. Examine a visual index of pasta shapes and compare it to a chart of entoptic phenomena and you will see that the forms derive from your neuroanatomy and have existed for tens of thousands of years, drawn and etched into cave walls and stones. In the burning of the marshmallow-y s’more is the beginning and end of civilization. The schmear of cream cheese glows like an all-seeing eye through the portal of the everything bagel, welcoming you into the bacterial pointillism of swarming bits on its surface.

A full-color, limited edition artist’s book will be available for sale.