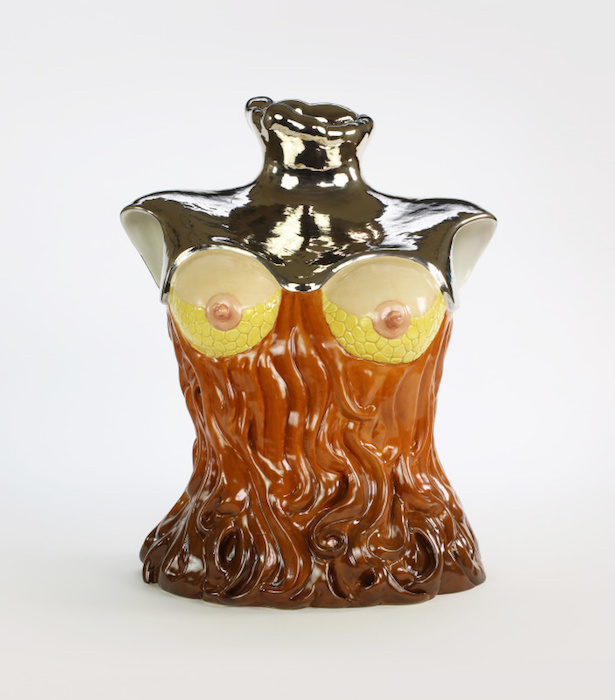 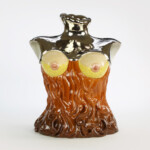 P·P·O·W is pleased to present “Spread”, Jessica Stoller’s second solo exhibition with the gallery. Working in the realm of figurative sculpture, Stoller mines the rich and complicated history of porcelain, harnessing its links to power, desire and taste. Synthesizing the cultural, historical, and corporeal notions of the female body, Stoller expands the feminist visual vernacular and makes space for subversion, defiance and play. Deftly employing myriad techniques over the past six years, Stoller’s complex works are hand-built, thrown, carved, molded and ultimately fired multiple times to create richly colored surfaces. The works on view marry a dizzying array of the imagined, idealized and grotesque. For Stoller the ‘grotesque’ becomes a powerful tool to challenge patriarchal power structures, as female figures flaunt what they are told to hide, reveling in their own pleasure and abjection. With masterful technical finesse, Stoller sculpts wrinkles, pimples, piercings, cellulite, and sagging flesh that writhes and pulsates with energy.

“Spread”, the title of the exhibition alludes to movement, defiance and display. Building on her previous still life tableaus, Stoller has created “Bloom”, a resplendent array of intricate botanical forms meticulously arranged by subtle gradating hue. This surreal sprawl of gaping corpse flowers, lilies, chrysanthemums and fleshy orchids, among others, is seductive and repugnant, a carnal visual feast. An abstracted and decaying female body emerges from within this tableau, her legs open to the viewer, her stomach and internal organs wrapping upwards amongst the floral diversity swarming around her.

For Stoller, “Spread” is also boldly personal as she explores, for the first time, her own body in its relation to the bodies of her mother and grandmother. Looking at the inherited body as it ages Stoller writes, “as I age, I can’t help but think about how we are intrinsically trying to slow the clock, to put the body that sags & wrinkles out of sight… My paternal grandma and I were very close. Towards the end of her life her hands were stiff with arthritis and her fingers angled in unnatural ways; these details are what makes a person, an accumulation of life, uniquely recorded through our bodies. These images stay with me.”

With “Breastplate”, Stoller celebrates the often-stigmatized miraculousness of the female body in its ability to give and sustain life. While breasts are endlessly represented in advertisements and popular culture, their biological purpose of providing food is often censored and deemed controversial. “Breastplate”, transforms both its ornamental and biological power into armor. Metallic lustre gilds the neck and chest, stopping just above the breasts to reveal the anatomy responsible for the conversion of blood to milk while luscious locks of hair cascade around the torso. Both utterly exposed and gloriously adorned, “Breastplate” encapsulates the sense permeating the entire exhibition that personal defiance can and will usurp dominant convention.

Jessica Stoller (b. 1981) lives and works in Brooklyn, NY. She received her BFA from the College for Creative Studies, and an MFA from Cranbrook Academy of Art. Stoller’s work has been reviewed, in such publications as The New York Times, Artforum, The Guardian, Hyperallergic, and Ceramics: Art and Perception, among others. She has been included in exhibitions at the Foundation Bernardaud, Limoges, France; the Zuckerman Museum of Art, GA; Greenwich House Pottery, NY; and Wave Hill, NY. She has had solo exhibitions at P·P·O·W, NY; Hionas Gallery, NY; and The Clay Studio, PA. A 2016 Pollock-Krasner grantee, Peter S. Reed grantee and Louis C. Tiffany nominee, Stoller has also participated in residencies including the Kohler Arts & Industry Program, The Museum of Arts and Design’s Artist Studios Program, and The Shigaraki Ceramic Culture Park, in Koka City, Japan.