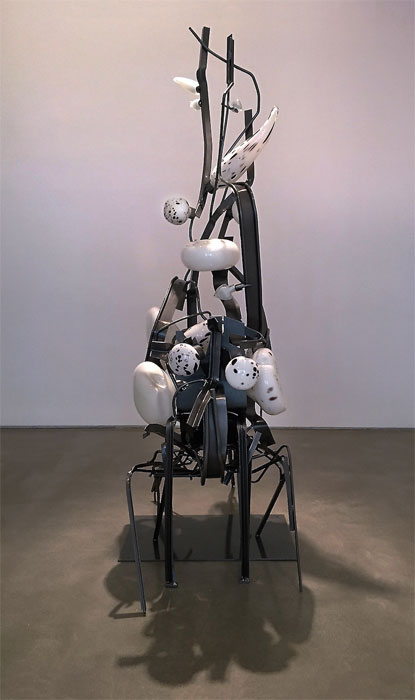 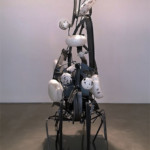 Nigoghossian’s practice relies on the counterbalance of several apparent paradoxes. The works’ gestural, often erratic shapes seem to undermine the industrial materials’ integrity. Compositionally, the sculptures echo the approaches of German Expressionist painting and drawing, while sharing other aspects of their manufacture and aesthetics with Minimalism and Process Art. Their formal elegance and seeming intentionality is controverted by the experimental nature of the artist’s making, the trial-and-error approach demanded by her mode of production. Furthermore, the sculptures’ initial impression of near-mechanical material austerity is undermined by a closer inspection, which reveals roughly welded and soldered jointing and visible copper wires, clear evidence of the artist’s hand.

Nigoghossian intends these works for outdoor display, and accordingly conceived of the exhibition as something that strains against its containing walls, pushing towards the outside world. The conflation and juxtaposition of indoor and outdoor, organic and inorganic, is a crucial aspect of her practice. The sculptures’ forms were loosely inspired by a species of rare shrimp, whose bodies have both transparent and opaque elements, as well as complex and visible jointing and skeletal systems. Likewise, the artist seeks to build three-dimensional mass from lines, to turn void to density; the works’ empty spaces feel equally substantial to the heavy metal contours.

The show’s title, “Exotica”, refers to a genre of American music popular in the 1950’s and 60’s, which glorified the non-native experience of Southeast Asian and Oceanic cultures; the musicians were suburban Americans, and their impressions of the distant locales were purely fantasy, based on Western culture’s representations, rather than actual encounter. Nigoghossian’s own work, likewise, stems in part from a desire to create foreign objects from a familiar lexicon, to fabricate idiosyncratic, alien forms while referencing and employing established Art Historical modes of expression – which vary from Brutalist and Deconstructivist architecture, to Baroque painting, to Modernist European drawing, to the Abstract Expressionist sculpture of John Chamberlain.

Jo Nigoghossian has exhibited widely in galleries both in the United States and abroad. This is her first exhibition at Team Gallery.