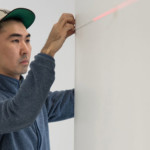 Oh’s work challenges an architecture that is not meant to impose or overbear on what it houses. Taking neutral, white gallery walls and seemingly open spaces, Oh marks boundaries, molds air and generates a presence from what is initially perceived as sheer absence. These dramatic spatial gestures toy with perception to create a physical experience extending beyond the visual. Point extends to line, and line connects to line eventually creating an ephemeral shape, one that could have existed in space but required the work of the artist to truly take visible form.

In practice, Oh’s process is responsive and flexible, working as a conversation between artist and architecture, but the end result is commanding, and compelling. Unlike traditional building materials used to demarcate and maintain spatial boundaries, Oh’s sculptures activate humble means, though with much of the same result. String, plexiglass, nails, stones, and more unite to direct attention in their placement and render the invisible, visible. Thus, his ability to shape space is at moments subtle and ephemeral, but entirely decisive.

For his fourth solo show at Marc Straus, Jong Oh enters into dialogue with the newly completed third and fourth floor gallery spaces, a first in the history of the gallery. Responding to these two very different architectural arenas, Oh’s work traces the familiar imperceptibility of built environments, calling into question the normalized spatial definitions of wall, room, window, skylight, and door. These processes defamiliarize the simple architecture of the gallery wall by marking unseen physical boundaries and interjecting into spaces that feel open. As Oh’s sculptures move into the interstices, further fragmenting, dividing, and constructing the notion of space, viewers not only have a chance to visualize the completed galleries themselves, but a chance to feel them, in all of their nuanced forms, through the perception-altering processes of Jong Oh.

Currently living and working in New York, Jong Oh was born in Mauritania in 1981, and earned his BFA from Hongik University in Seoul and MFA from the School of Visual Art in New York. Since then, Oh has participated in numerous solo shows worldwide, including his recent exhibition “Corner Dialogue” at the Seoul Museum of Art’s Project gallery. Presently, Oh is featured in “EVERY DAY IS A GOOD DAY (日々是好日)” Tokyo, Japan, a performance-based exhibition presented by Spiral and Marc Straus with artist Jinsu Han. He is also presently in a two-artist exhibition at the DeCordova Museum in Massachusetts entitled “Sculpting with Air”.