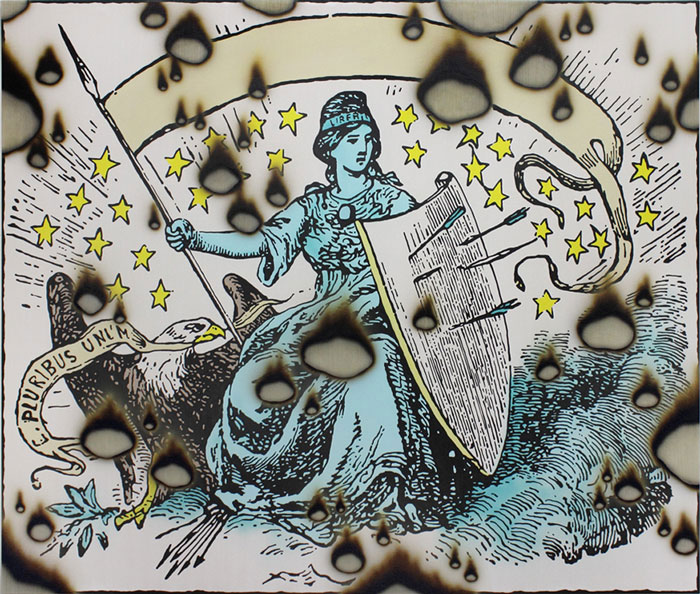 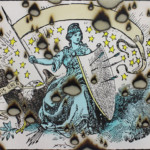 Luis De Jesus Los Angeles is very pleased to announce “Don’t cross streams while trading horses”, an exhibition of new paintings and sculptures by Josh Reames. This will be the artist’s third exhibition with the gallery.

In “Don’t cross streams while trading horses”, Reames dismantles symbols associated with American economic and political power. Referencing Abraham Lincoln’s acceptance speech for a second-term nomination in which he modestly stated that it was best not to “swap horses while crossing the river,” Reames inverts the sentiment to draw focus to the transactional nature of the expression while using humor to editorialize business as usual. Reames usurps emotion-saturated metaphors and codified visual signs-logos, mottos, anthems, seals-everything that stabilizes status quo is placed on the chopping block. Brooms sweep up dirt. Snakes lose their heads. Cars drive off cliffs. Painting is protest and Reames’ paintings are akin to burning flags that illuminate the dusk by setting fire to the establishment. The paintings in “Don’t cross streams while trading horses” depict symbols perforated by tromp l’oeil singes and torch-burned holes. Metaphoric destruction can be as revelatory as the real thing.

In the spirit of Sigmar Polke and Gerhard Richter’s “Capitalist Realism”, Reames appropriates ideas that stand-in for American identity, using the familiar and abstractions of the familiar as an apparatus to critique. The graphic language of revolutionary political satire and visualizations of the American dream are elastic and emotional, their meanings easily manipulated by those in power. Echoing this sentiment in a grand gesture, Reames has created a sculpture of a trampoline with an American flag jumping mat – an object intended for recreation or exercise transformed into a symbol of irreverence and futility. The works in “Don’t cross streams while trading horses” demonstrate an attempt to portray a new reality while disrupting the traditional functions of formal space, content, and narrative. “Don’t cross streams while trading horses” reflects on a new age of violence and turmoil with constant reminders of the role that image creation plays within it.