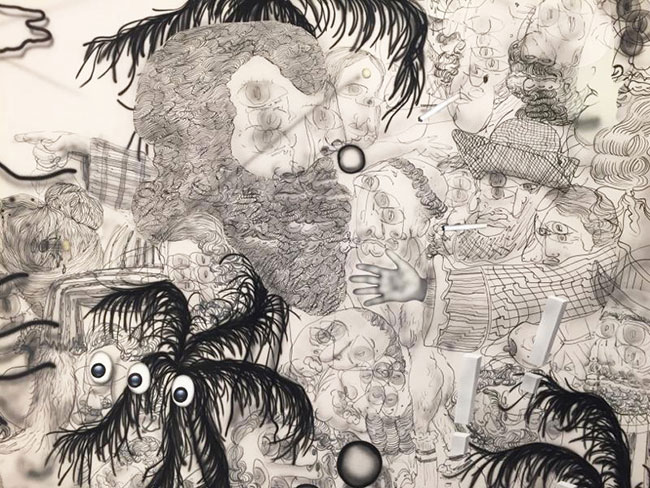 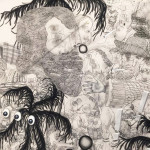 Using the gallery as their studio during the month of January, Reames and Lerma have created a group of paintings and sculpture whose centerpiece is a pair of monumental paintings (composed of two triptychs) that measure 10 x 24 feet each (over 3 x 7 meters). It started with Josh Reames painting a single palm tree and quickly evolved into a metaphorical landscape inspired by the Cayman Inlands – a Caribbean paradise and tax haven with a history of piracy.

Responding instinctively to each other’s mark making and personal choices, this improvisational group portrait mixes the characteristic styles of 18th century political and social satire (James Gillray and Thomas Rowlandson) with the artists’ bold, individual styles and penchant for visual satire among other iconography that characterizes their personal work.

Populated by the likenesses of persons who visited the artists during their residency – collectors, curators, museum directors, artists, students and the occasional passerby – the paintings employ the grand scale of European history painting, presenting a pseudo history through a chaotic, unorganized battle being waged in a 21st century virtual reality that references the world’s most notorious tax shelter.

In addition to these two central paintings, the artists have also collaborated on a sculptural installation featuring a mirrored door–cum–disco ball that plays with notions of access and a shattered reality. They have also contributed their own individual paintings and drawings.

Josh Reames received his MFA from the Art Institute of Chicago and lives and works in New York City. Jose Lerma received his MFA from University of Wisconsin–Madison and lives and works in Chicago and San Juan, PR. This is Josh Reames third solo project with Luis De Jesus Los Angeles. The Gallery has presented Reames’ work at EXPO Chicago, Dallas Art Fair, UNTITLED Miami, and VOLTA New York. Jose Lerma is represented by Andrea Rosen Gallery, New York. Both artists have exhibited in the US, Europe and Latin America.