Julian Charrière – For They That Sow the Wind 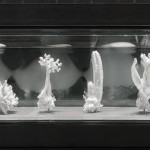 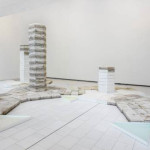 Parasol unit foundation for contemporary art is delighted to present “Julian Charrière: For They That Sow the Wind”, a first solo exhibition in the United Kingdom for this French-Swiss artist. It will include sculpture, documented performance, installations, photographs and film.

Charrière is a conceptual artist whose activities and interventions during the first decade of his career have taken him to some of the remotest regions of the planet, researching geology, biology, physics, history and archaeology. Much of his work is concerned with time, the continuous cycle of past, present and future, as well as sudden and gradual physical transformations that have occurred naturally or due to human activity. Creating works while exploring ecological and environmental issues in specific locations, Charrière examines how humanity interrelates with the natural order. A significant part of his oeuvre to date has led him to scrutinize the actual and dominant demands for technological advances, most of which depend on further depleting the Earth’s natural resources and have vast implications for the future of our ecological systems.

Among the several installations exhibited at Parasol unit by this Berlin-based artist is “Future Fossil Spaces”, 2014, a large configuration of thick salt bricks extracted from the Salar de Uyuni salt deposits in Bolivia, South America, a region now commonly referred to as the ‘lithium triangle’. The chemical element lithium is an essential part of the batteries that power our electronic devices. The film “Somewhere”, 2014, and the photographic series “Polygon”, 2015, document the devastation caused by human activity in Semipalatinsk, the site in Kazakhstan where, between 1949 and 1989, the Soviet Union conducted 456 nuclear tests. Charrière’s investigations for “Polygon” were prompted by J.G. Ballard’s short story, “The Terminal Beach”.

In the upper gallery, three installations make connections between past and future via the fleeting present. While raising existentialist questions they also have an ethereal beauty. In a series of large photographs, “The Blue Fossil Entropic Stories”, 2013, Charrière is seen as a fragile silhouette melting the iceberg beneath his feet with a blowtorch. The image acts as a catalyst, a projection surface, inviting every spectator to imagine being the protagonist. In “We Are All Astronauts”, 2013, various globes, ranging from 1890 to 2011, appear to float over a large table. The artist has eliminated geopolitical divisions between countries, continents and people by sanding the surface of each globe and allowing their dust to intermingle on the table top. He uses an ‘international sandpaper’ he produced from mineral samples gathered from all countries recognised by the United Nations. Finally, “Tropisme”, 2015, displays several plants known to have existed during the Cretaceous period. Shock-frozen at -196˚ centigrade by being dipped in liquid nitrogen, the plants are displayed in a sealed glass vitrine and kept refrigerated at –20˚C. As long as these plants from 65 million years ago are kept frozen and cared for by humans, they will continue to represent an interface between past and future.

This exhibition is curated by Ziba Ardalan, Founder/Director of Parasol unit. It is accompanied by a full-colour publication that includes two insightful essays, one by contemporary philosopher Timothy Morton and the other by Ziba Ardalan, along with her interview of the artist.

Julian Charrière, born 1987 in Morges, Switzerland, currently lives and works in Berlin, Germany. He graduated from the Institut für Raumexperimente (Institute of Spatial Experiments) in Berlin in 2013 as Meisterschüler (Master student) of the artist Prof. Olafur Eliasson. Since graduating, Charrière has been awarded several prestigious prizes, including the Kiefer Hablitzel Award / Swiss Art Awards in both 2013 and 2015, the Prix Culturel Manor Vaud in 2014 among others. Charrière collaborated with the artist Julius von Bismarck on “Some Pigeons Are More Equal Than Others” for the 13th International Architecture Exhibition – La Biennale di Venezia. (This site-specific performance work, the title of which derives from the novel “Animal Farm” by George Orwell, attracted pigeons into a machine where they were airbrushed with a variety of bright non-toxic dyes before being released into the urban streets, thereby making each one unique.) Since then his work has been exhibited in various international exhibitions and biennales such as Thyssen Bornemizsa Art Contemporary, Kunsthalle Wien, Musée des Beaux-Arts de Lausanne, Centre Culturel Suisse, Paris, and Biennale de Lyon.