Julie Blackmon – Up Around the Bend 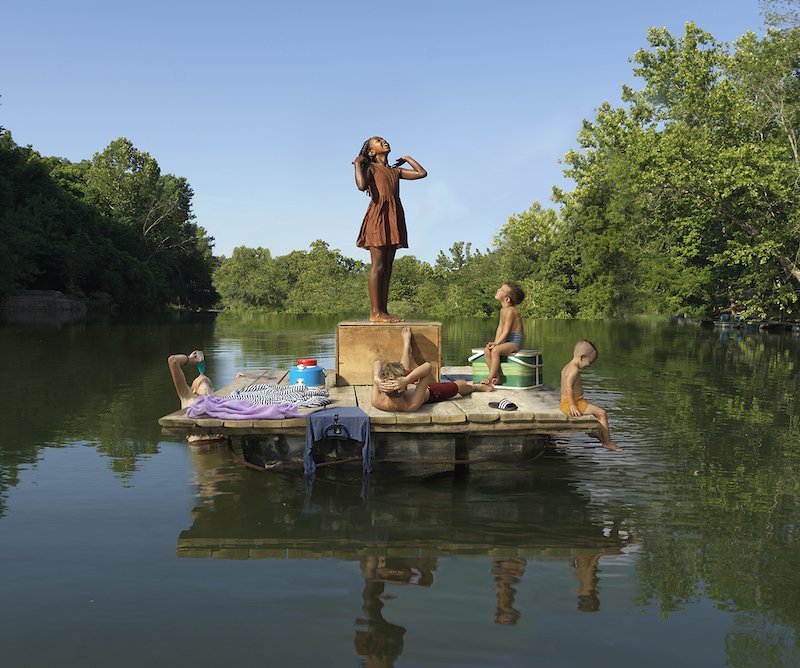 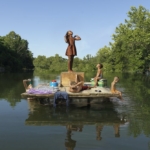 Robert Mann Gallery is pleased to present “Up Around the Bend”, Julie Blackmon’s sixth solo exhibition with the gallery. Blackmon’s photographs delicately toe the line between wit and wry. Her examination of the suburban landscape includes the discovery of new technology, childhood exploration and imaginative play through the four seasons in a world largely devoid of adults — all culminating in satiric tableaus. Although often innocent at first glance, her photographs include a menacing element just barely beneath the surface. A shark in the water, an abandoned knife near a toddler, or a child’s dead-man’s float. Blackmon explains that “The kids and crazy scenes are often just metaphors for a certain psychological state” (The Guardian).

Several recent works by Blackmon have drawn inspiration from 19th century oil paintings by George Caleb Bingham. Blackmon’s “Flatboat” is a reinvention of Bingham’s painting, “The Jolly Flatboatmen”, which “depicts a group of men who, after accomplishing the hard work of rowing their flatboat upstream and loading it with cargo, are now relaxing and enjoying music and dancing” (The Metropolitan Museum of Art). In this contemporary reimagination, Blackmon recontextualizes the work, bringing the composition to life in current times through her well thought out details and beautifully placed characters. The work exudes mischievousness as the idle children who sit unwatched replace the men who have rowed upstream. “Paddleboard”, inspired by Bingham’s “Fur Traders Descending the Missouri”, depicts calm on the brink of chaos. Both works created in the artist’s home state of Missouri, in Blackmon’s tableau, she replaces the male rower with a pregnant mother, a lounging woman with the pile of luggage, and a black cat with the small boy. However, the most notable difference is the replacement of driftwood with a shark fin, circling the travelers and adding a sense of foreboding and danger to an already curious narrative.

This exhibition opens in conjunction with the release of Blackmon’s third monograph, “Midwest Materials” (Radius Books 2022). In this monograph, “Julie Blackmon has created a new body of work that sparkles with the wit, dark humor, and irony for which the artist has gained such renown” (Radius Books).

Julie Blackmon lives and works in Springfield, Missouri. The artist’s work is found in numerous museums and public collections including the George Eastman House; Nelson Atkins Museum of Art; Museum of Fine Arts, Houston; the Portland Museum of Art; Kemper Museum of Contemporary Art, Kansas City; the Portland Art Museum; and the Musée Français de la Photographie in Bièvres, France. She was named American Photo’s “Emerging Photographer of 2008” and one of PDN’s “30 New and Emerging Photographers” in 2007, and has been the recipient of various awards including first prize from The Santa Fe Center for Photography in the Project Competition in 2006. Blackmon has previously published two monographs, both of which sold out, “Domestic Vacations” (Radius Books, 2008) and “Homegrown” (Radius Books co-published with Robert Mann Gallery, 2014).