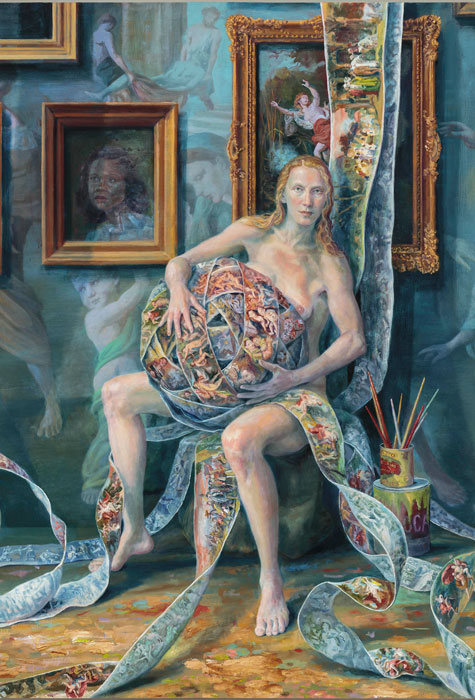 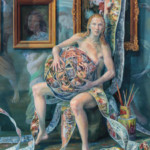 P·P·O·W is pleased to announce “Hunter Gatherer”, Julie Heffernan’s eighth solo exhibition with the gallery and her first New York presentation in five years. With this exhibition, Heffernan continues her practice of bringing the viewer directly into contact with her interior world through a series of virtuosic self-portraits. For over three decades, Heffernan’s career can be viewed as chronicling an individual life; her early paintings describe youthfulness through ripe still lives and fecund landscapes, while her later paintings suggest maturation through depictions of accumulation and loss.

Compelled by the excess of images our contemporary world has access to, Heffernan, in her new series, examines the accumulation of culture in our mental landscapes and the effect such images have on our collective unconscious. By unraveling our cultural memory as it is captured in shared imagery, Heffernan reveals how images ranging from Old Master paintings to advertisements, films stills, and pornography tell stories that ultimately determine our society’s behavior and define who we are as social beings.

In “Hunter Gatherer” Heffernan unmasks misogynistic power structures, offering a path for reexamination and an opportunity to honor women who have been misrepresented or excluded from this visual history. The exhibition will feature a series of nude female self-portraits bearing scrolls that depict a double-sided trove of fragmented images. One side depicts seemingly lush and sensual moments from Old Master paintings; the other depicts journalistic and cinematic accounts of historical atrocities. Images such as David’s “Napoleon Crossing the Alps” and Luca Giordano’s “The Abduction of the Sabine Women” are fused with film stills from Stanley Kubrick’s “Lolita” and Russ Meyer’s “Faster, Pussycat! Kill! Kill!”. Once revered pictures are thus seen to anchor a continuum of historical oppression, glorifying violence, discrimination, and rape.

Heffernan’s nudes offer an alternative visual language. From the caryatids of ancient Greece to the 19th century Beaux Artes depictions of woman as Virtue, the female figure has long been known as the bearer of history and tradition. Heffernan’s female figures, however, are not passive receivers. In “Self-Portrait with the Daughters”, which Heffernan describes as the “origin” piece for the exhibition, she reveals the misogyny and brutality which define our visual history. The nude stands frontally, presenting a scroll as evidence of a long history of visual culture canonizing corruption and abuse of power.

The “Hunter Gatherer” series give voices to women who have been silenced. Heffernan’s women stand in salon style painting galleries evoking grand museums of the Western world. Behind them are varying portraits of women who took on power structures such as Carolee Schneemann, Rachel Carson, Anita Hill, Ana Mendieta, Jane Goodall, Julia Butterfly Hill, Tarana Burke, and many more. Standing amidst all manner of art supplies Heffernan suggests that in the future women will be the creators of a more just visual lexicon.

Heffernan (b. 1956, Illinois) received her BFA in Painting and Printmaking from the University of California, Santa Cruz and her MFA from Yale School of Art (CT), and has been exhibiting widely for the past two decades. Selected exhibitions include those at The Korean Biennial (Korea), Weatherspoon Art Gallery (NC), Tampa Museum of Art (FL), Knoxville Museum of Art (TN), Columbia Museum of Art (SC), Milwaukee Art Museum (WI), The New Museum (NY), The Norton Museum (FL), The American Academy of Arts and Letters (NY), Kohler Arts Center (WI), The Palmer Museum of Art (PA), National Academy of Art (NY), McNay Art Museum (TX), Herter Art Gallery (MA), Mint Museum (NC), Virginia Museum of Fine Art (VA), Oklahoma City Museum of Art (OK), Crocker Art Museum (CA), The Palo Alto Cultural Center (CA), San Angelo Museum of Fine Arts (TX), among numerous others. Her work has also been acquired by many of the institutions listed above. Heffernan is a Professor of Fine Arts at Montclair State University.

Illustrated catalog available with an essay by Maura Reilly.