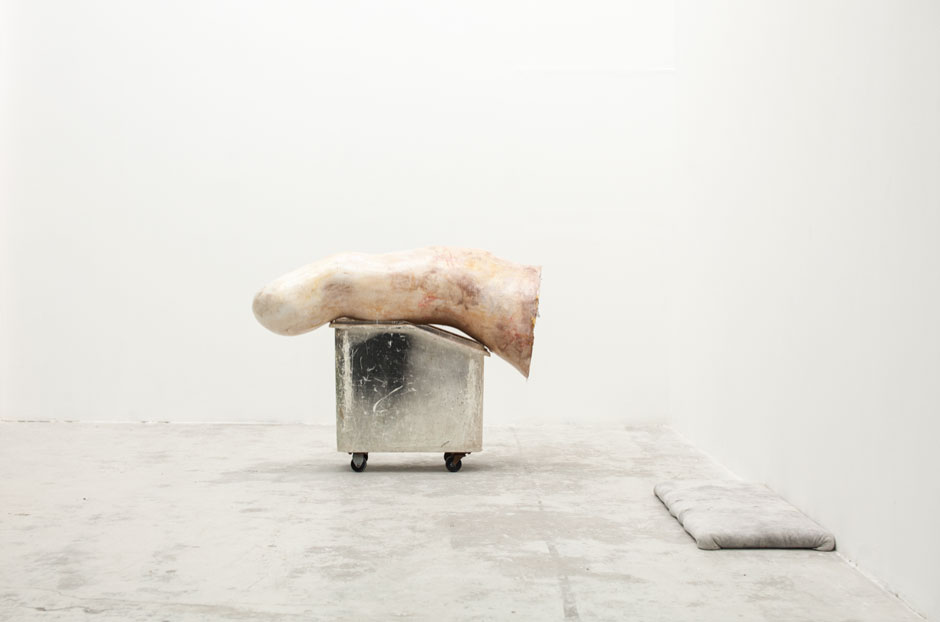 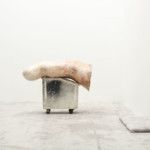 The title of Jumana Manna’s first solo exhibition in Switzerland, “Adrenarchy” is a take on “Adrenarche”, an early sexual maturation stage in some higher primates, which similarly takes place in humans before the age of 12. During this phase, the body, its smell and oiliness dramatically change, following an increase in cortisol levels, resulting in what is commonly known as puberty. A fabricated combination of -adrenalin and -anarchy Manna’s title aims at transposing this uncomfortable moment of transformation and awe into an installation which combines anthropomorphic elements, whose shape and formal qualities incarnate ambiguity.

Manna is a sculptor and filmmaker, whose main interests address how various forms of power are articulated through relationships, often focusing on the body in relation to narratives of nationalism, and histories of place. Manna’s work uses often a poetic and fragmented visual language in order to address biographical experiences. Individuals play the central roles in narratives where the body becomes a political tool addressing more global concerns, as exemplified in her recent feature film “Wild Relatives” (2018), which follows a batch of seeds that were sent from Aleppo, Syria, to the Global Seed Vault, in the Arctic island of Svalbard, and recently back to Lebanon to be planted. Following the path of this transaction, a series of encounters unfold a matrix of lives between these two distant spots of the earth. The film captures both the violence and melancholy of both climate and war induced disasters on earth, alongside practices of care that manifest resilience it.

For this exhibition, the artist has created a new body of work comprising sculptures laying over a sauna-inspired construction. Evoking strength and eroticism, these structures seem like archeological fossils sweating out some tension. “Armpit” (2018) and “Armpit Shell” (2018) continue the Muscle-Vase series, which she began in 2014; a body of androgynous and dismembered hollow vessels that are juxtaposed with found furniture or simple structures. On the right side of the wall, “Torso II” (2017), a white skin-shell sculpture resembling the shape of a torso is leaning against the wall. Accompanying the sculptures, one finds piles of towels that introduce softness to the hard bodies, as well a a tablet and smart phone playing short-looped animations, “Balls” and “Flutter” (both 2014). These comical and grotesque videos add an additional layer to the over-sized bodies and their surfaces, into the digital, haptic realm. They linger in the space like left-behind objects, adding to the general uncanniness. Jumana Manna’s sculptural work simultaneously appears to be strong in their materiality, while also bearing a fragile and deconstructed presence. This ambivalence is also palpable in the contrast between the delicate and candid way she captures the sheer beauty of every day human moments and landscapes in her films, and the tension brought by her use of humour and criticism in other installations. Manna’s artworks are conceived as surrogate vessels, through which a psychological journey takes place.

Additionally, in the adjacent room, SALTS presents Manna’s “Blessed, Blessed Oblivion”, her first film from 2010, inspired by Kenneth Anger’s “Scorpio Rising” (1963), which weaves together a portrait of male thug culture in East Jerusalem, manifested in barbershops, auto-shops and body building.