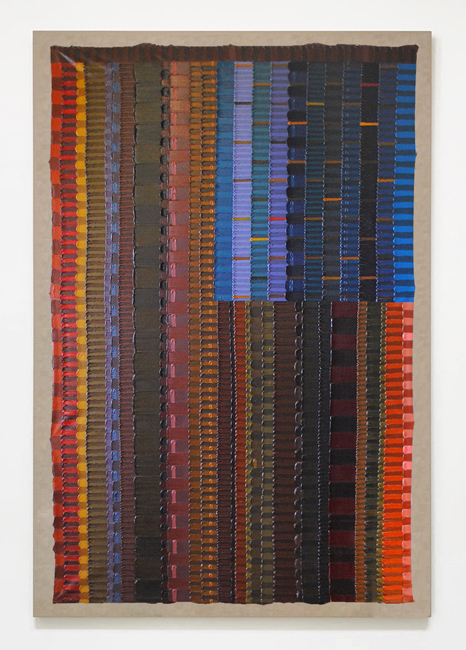 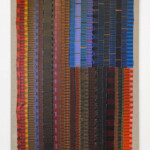 “Allegiances and Convictions” explores the American flag as a malleable symbol of ideals, promises, and identity. June Edmonds’s new Flag Paintings create space for the inclusion of multiple identities including race, nationality, gender, and political leanings. Each flag is associated with the narrative of an African American, past or present, a current event, or an anecdote from American history. Edmonds investigates the complexities of these stories through the creation of new symbols for Americanness.

Color has played an especially important role in the intersection of Edmonds’s personal, political and artistic journeys. Color associations can be tied to culturally symbolic imagery, trauma, and emotion, giving color the unique discursive ability to communicate about power and systemic disenfranchisement. The Flag Paintings explore the psychological construct of skin color utilizing the primary colors of brown skin tones to build Edmonds’s radical propositions: symbols of American identity that not only more accurately reflect the broader changes in the racial and ethnic makeup of the country’s population but the ideals and promises enshrined in the Constitution. With thick, shifting brushstrokes in rich earth colors organized into columns of varying widths, the flags rise vertically, like human portraits. On this, Edmonds’s states: “These flags are standing for something – so I’m gonna keep them standing.”

Her work can be found in the collections of the Davis Museum, Wellesley College, MA; California African American Museum, Los Angeles, and numerous private collections throughout the U.S. Edmonds has completed several public art projects for the city of Los Angeles and the Department of Cultural Affairs, including a permanent installation at the MTA Pacific Station in Long Beach, CA. She is the recipient of a number of residencies and awards, including a 2018 City of Los Angeles Individual Artist Fellowship (COLA); California Arts Council Individual Artist Grant; Paducah Artist Residency in Kentucky; Helene Wurlitzer Foundation Artist Residency in Taos, NM; and Dorland Mountain Community Artist Residency in Temecula, CA.