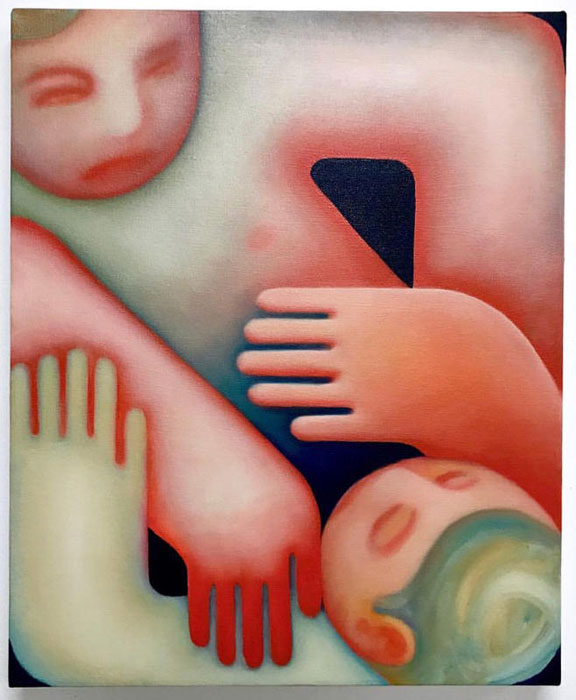 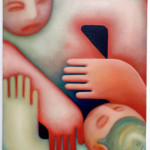 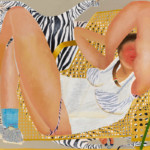 Monya Rowe Gallery is excited to announce a two-person exhibition of paintings featuring Justin Liam O’Brien and Celeste Rapone. The title of the exhibition, “Rose-tinted”, is inspired by Jean Baudrillard’s (1929 – 2007) “Simulations”, specifically the section “Rose-Coloured Resurrection”, which considers ideas about artifice, surface, and the notion of trying. It is also a color signifier for blushing, embarrassment, anger, or stimulation.

Justin Liam O’Brien‘s paintings of nameless unspecified male nude figures are wrought with sexuality and alienation. The protagonists are depicted awkwardly embracing, engaging in sexual acts and taking pictures of each other. Drawing inspiration from phone apps such as, Grinder, Tinder and Scruff, O’Brien examines the psychological oversimplified social-sexual environment queer people currently inhabit. His paintings explore the immediacy and emotional distance of this current digital landscape, but also the tenderness and feeling.

Like O’Brien, Celeste Rapone challenges the boundaries between abstraction and figuration within a psychological space that hints at discomfort and absurdity. Rapone depicts figures engaging in some sort of newfound amateur endeavor, ranging from sports to mundane tasks. Familiarity with these activities is learned though painting, thereby acting as both self-portrait and a metaphor for painting itself. Rapone’s constructs combine personal history with the unknown. Her humorous autobiographical portraits explore anticipation and doubt.

Celeste Rapone (b. 1985, Wayne, NY) received a MFA from School of the Art Institute of Chicago (SAIC), IL and a BFA from Rhode Island School of Design (RISD), Providence, RI. Her work has recently been exhibited in a two-person show at Corbett vs Dempsey, Chicago, IL and a group show at Roberts Projects, Los Angeles, CA. She is the recipient of a 2018 Pollock-Krasner Foundation Grant. Rapone lives and works in Chicago, IL