Justin Mortimer – It Is Here 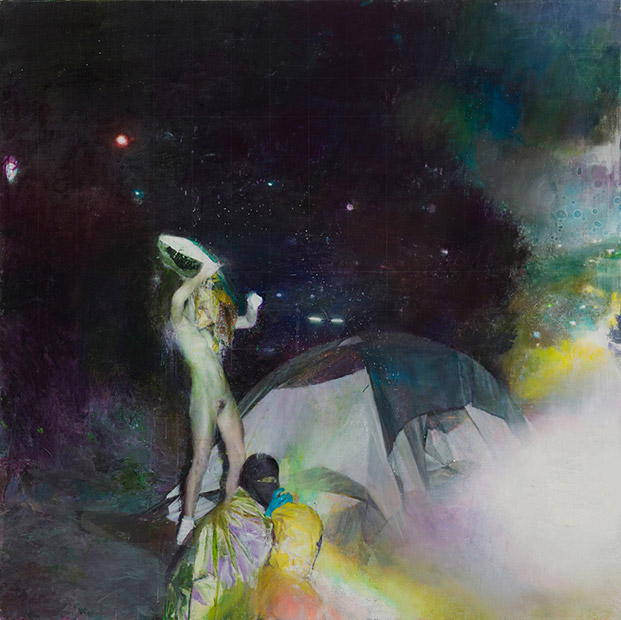 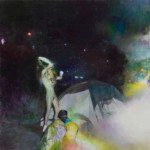 Parafin presents its second exhibition with the British painter Justin Mortimer (b.1970), widely regarded as one of the leading painters working today and an emblematic figure for a younger generation of artists. Mortimer is an artist who has consistently pursued a particular vision and way of working independently of the vagaries of fashion.

Justin Mortimer’s paintings address the present moment. They reflect upon a world in a state of disorder and respond to recent events in the US, Calais, the Ukraine, West Africa, Syria and Afghanistan. The paintings combine imagery sourced from the internet with archival material from old books and magazines in order to visualise a world in which nothing is stable or certain, echoing the tectonic cracks appearing in the old world order.

“It Is Here” (2016), the large painting that gives the exhibition its title, epitomizes Mortimer’s ambiguous approach to his subject matter. A night scene featuring a naked figure, a tent and a shrouded, seated figure who gazes out at the viewer, it could be a scene from the Glastonbury Festival, perhaps the aftermath of a good time, or equally a depiction of the grim realities of The Jungle, the notorious refugee camp in Calais. Another large canvas “Zona” (2016) transposes hazmat suit-clad figures from the recent Ebola crisis in Africa to a dark northern forest lit by flares and plumes of smoke culled from imagery of the riots in Ferguson, Missouri. In “Fugue” (2016-17) an anonymous figure occupies a liminal space that is at once interior and landscape, and in which books and papers are piled up suggesting an excess of information. Cumulatively, Mortimer’s work suggests that the present state of global instability is drawn from many sources.

A number of new works contain abstract elements, richly coloured striations, which are derived from found images of cracked plasma screens. By using such motifs Mortimer addresses not only the ways in which we consume news and imagery – through the screens of phones, tablets and computers – but the difficulty of distinguishing between medium and message.

As a body of work, “It is Here” powerfully articulates the present state of affairs. It is not a pleasant vision, though Mortimer finds extraordinary moments of beauty in passages of paint depicting smoke flares, the texture of plastic, the colours of flesh or the richness of the night sky. Here Mortimer stakes a claim for the unique quality of painting and its ability render reality. He has said: ‘With the ubiquity and homogeneity of [digital photography] painting is reinstating its power to cut through to the marrow of experience.’

Justin Mortimer lives and works in London. He has won several prestigious awards including the EAST Award (2004), NatWest Art Prize (1996) and the BP National Portrait Award (1991). His work has been included in a number of important recent surveys of contemporary painting, including “A Brush With The Real: Figurative Painting Today” (2014) and “Vitamin P2: New Perspectives in Painting” (2011). Recent solo exhibitions include The Factory, London (2017), Djanogly Art Gallery, Nottingham (2015), Parafin, London (2015), Future Perfect, Singapore (2015) and Haunch of Venison, London (2012).