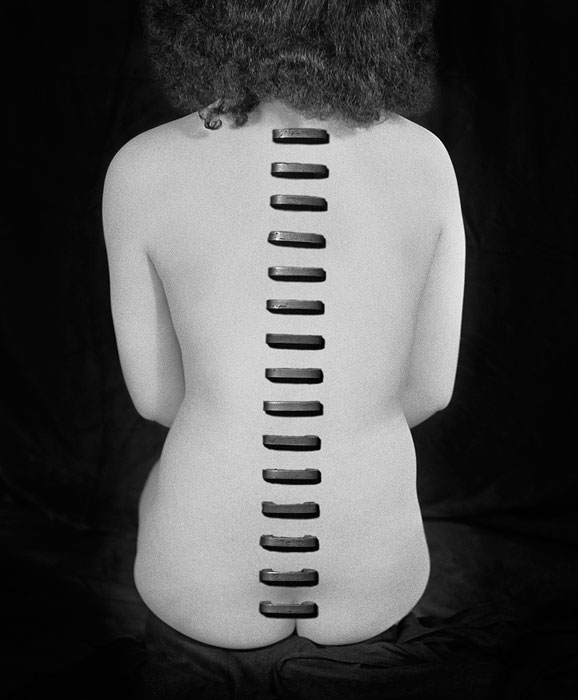 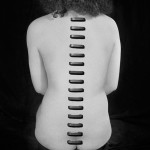 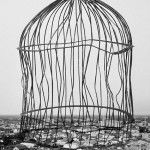 Taka Ishii Gallery New York is pleased to present a solo exhibition of the Japanese photographer and poet, Kansuke Yamamoto (1914-1987). Along with a rare selection of the Artist’s vintage works, on view are fourteen modern prints of the Artist’s most iconic images from the period 1933-1953, reproduced by the amanasalto platinum palladium print studio in Japan under the supervision of Toshio Yamamoto, the son of the Artist and representative of the Estate. They are crafted with faithful precision to resemble the Artist’s originality of expression and have been exclusively produced by amanasalto to render exceptional print quality and tonal range.

Within this special selection are highly representative images such as the collage “A Chronicle of Drifting” (1949) and the photomontage “Reminiscence” (1953). The sophisticated image “Buddhist Temple’s Birdcage” (1940), in which an old-fashioned black telephone is placed inside a white parakeet’s cage, conveys the Artist’s resistance to the political discourse of the era. The black telephone represents freedom of speech and the cage Japan’s social structure. For more than two decades leading to the early 1940s, avant-garde artists were frequently prosecuted for suspect political unconformity, especially tied to international communism. The title’s possessive phrase “Temple’s Birdcage” expresses authority in the wartime era. Yamamoto also used the birdcage as a symbol in the aforementioned image “Reminiscence” (1953), however, in this work, the cage’s bars are twisted and superimposed over a Japanese city, unmistakably reminding the viewer of the memory of the atomic bomb.

Yamamoto began photographing in 1931 at the age of seventeen in Nagoya. After spending a year in Tokyo studying French poetry at the French Literature Department of Meiji University, he dropped out and returned to his hometown where he acquainted himself with the poetry of Chiru Yamanaka, an important Surrealist who also lived in Nagoya and published “Ciné”, a magazine of Surrealist poetry. An anarchist who soon became a rebellious artist, Yamamoto was a literary protégé exposed to the leftist thoughts popular in Japan since the 1920s, ideas that were closely associated to the Surrealist art movements especially within literary circles. Though first and foremost a poet Yamamoto embraced photography and rapidly involved himself in spearheading the new visual art movements in Nagoya.

The Artist owed much to his father, Goro Yamamoto, who owned a photo-supply shop in Nagoya as well as cofounded the Aiyu Photography Club, the largest amateur photo-club in Nagoya. At this time photography was a pursuit practiced solely by the wealthy. And although this provided Yamamoto with a strong exposure to the world of photography at a young age, he was not one to embrace the Pictorialist trends prevalent in the Club and the salon style exhibitions of the day. The young Yamamoto sought his own path amidst the crossroads of the many coexisting modes of modern expression. The newest of European artistic movements; Surrealism and Dadaism, the Bauhaus, German-based Neue Sachlichkeit, and Russian Constructivism, were all introduced to Japan in the early 1920s and quickly adapted to Japanese photographic modernism, or Shinko Shashin [New Photography].

Yamamoto’s early experiments in collage and photomontage utilized the techniques of the Surrealists in tandem with his own artistic philosophies, beginning a lifelong dialogue in internalizing an internationally inherited art form into his own. While it is known that artists such as Man Ray, László Moholy-Nagy, Yves Tanguy and René Magritte were inspirational to Yamamoto during his artistic development, his photographic works and skills from the outset were strongly innovative and equally comparable to the European artists who he studied. The earliest of Yamamoto’s known collage photographs, “The Developing Thought of a Human… Mist and Bedroom and” (1932), is comprised of three close-up images of women’s lips, a woman’s leg, a woman’s face, and newspaper clippings about the Great Depression of 1929 and the Conference on Disarmament in Geneva of 1932. This highly original work represents the socio political situation of the 1930s through a veil of whimsy, sexuality and lampoonery, signature themes in Yamamoto’s practice. By the end of the 1930s, he was leading the Nagoya avant-garde scene as an influential center in Japan. During the Pacific War and until the end of World War II artistic activities were forbidden, and it was after the war’s end that Yamamoto continued to create singular works; working in different mediums including photography, drawing, painting and poetry.