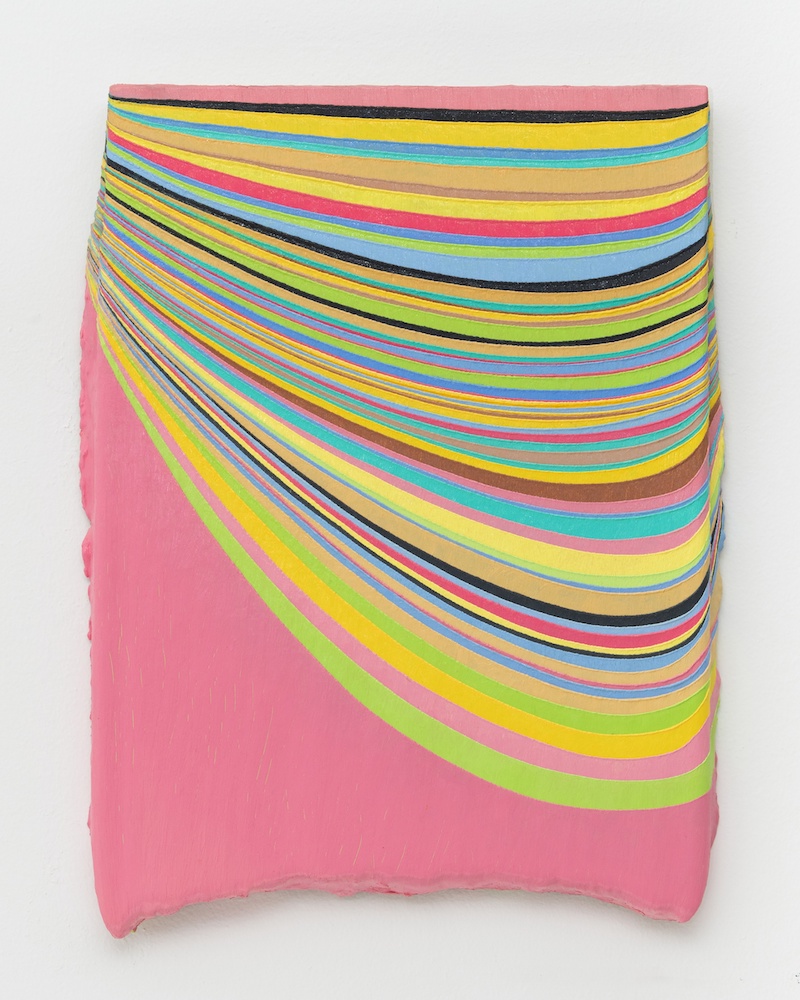 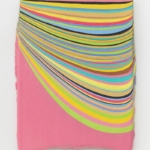 Tomio Koyama Gallery is pleased to present a solo exhibition with Katsunobu. This marks the artist’s first solo exhibition at the gallery, and features a selection of works produced between 2015 and 2022.

Katsunobu was born in Osaka in 1992. He has been creating art for about 15 years since he started taking oil painting classes at the age of 14, while in his second year at junior high school. To date, he has participated in many exhibitions and art fairs and was rewarded the Grand Prix at the Art Democracy inclusive Art Fest 2021.

Katsunobu’s abstract paintings reminiscent of minimal art, consists of layers of vivid colors such as green, yellow, pink, and blue, which are painted on top of each other. Initially working in grids, in recent years he has slowly shifted to depicting striped patterns, in which he paints one surface after another, leaving the top of the previously painted surface as a line.

The flowing lines created through his painstaking application and the materiality of the paint slightly raised by overlapping the colored surfaces and edges instil the works with a unique sense of human touch and warmth, as well as a mysterious charm of evoking light depending on the angle from which it is viewed.

Curator and artist Hiroaki Nakatsugawa, mentions as follows with regards to Katsunobu and his works.

“(According to Tatsuo Osawa, Director of Atelier Ripe House, with whom Katsunobu is affiliated), when he showed Katsunobu how to make the color green by mixing blue and yellow, he seemed stunned and kept staring at the paint for a while. Thereafter he put paint out on his pallet and continued to look at and study it over the course of four months, then gradually began to make various shades of green.

To know that it is possible to make completely different colors by mixing one color with another. By making colors and filling the canvas with one’s very own shades and hues, one is able to express their own world subjectively. I feel that what is important for art is to facilitate means for drawing out potential, rather than trying to teach the correct way to draw or paint.” (“Hearts Letter” mail magazine, NHK Public Welfare Organization)

To find his ideal color landscape, Katsunobu carefully mixes colors and applies paints every day. While he works on several pieces at the same time, he mentions that it is a long process that takes him almost a year to complete one piece.

“I first encountered Katsunobu’s work last year, when Ms. Sugimoto (Founder/Director, Arts and Creative Mind Association) had asked me to serve as a judge for “Art Democracy inclusive Art Fest 2021.” I was overwhelmed by the sheer clarity and perfection of his paintings, and the way in which they appeared to harbor various aspects despite their simplicity. Having developed an interest in his work and wanting to find out how they are indeed created, I decided to organize an opportunity to introduce his art at the gallery, which led to the realization of this solo exhibition. I am not very familiar with the definition and framework of outsider art, so I hope visitors will view his works without fixating on such terminologies and discourses.” (Tomio Koyama)

Katsunobu (born 1992) started going to an art class in 2006, when he was in middle school (14 years old). He has been making artworks at Ripe House (Higashi-Osaka, Osaka) for more than a decade. Until around 2015, he created abstract paintings of overlapping rectangles with beautiful textures. Recently, he has been making works with stripes, which are not simply lines drawn horizontally but are created by the countless succession of beginning of brush strokes.

Katsunobu’s works, achieved by applying layers of paints according to his own rules, possess the fundamental elements of Modernist expressions, such as flatness, materiality, gravity, repetition of action and sequence of time. At the same time, they escape from these elements, and exist as unique abstract paintings.

Fascinated by the endless possibilities of color, Katsunobu continues to pursue his practice with much sincerity. We hope visitors will take this opportunity to engage with the distinct world of his works.