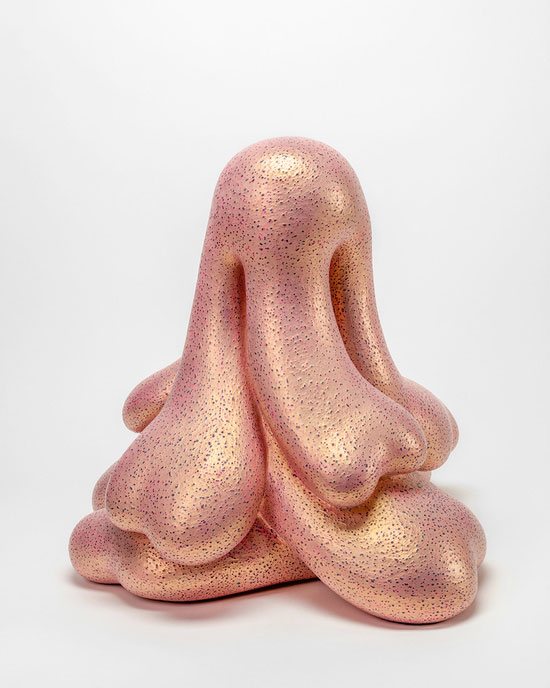 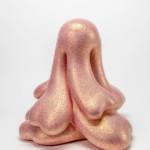 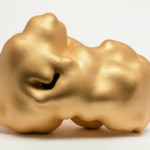 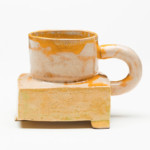 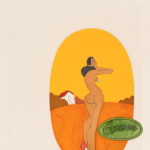 Hauser & Wirth London is pleased to present a survey of sculptures and drawings by Ken Price, one of the most influential figures of 20th century ceramic art. Working amongst a group of innovative artists who emerged from the creative landscape of 1960s Los Angeles, Price spearheaded a revolutionary shift in the traditional conception of ceramics from a purely functional medium to the realm of art object. Finding inspiration in sources diverse as the Bauhaus, Japanese ceramics, classic Southwestern pottery, jazz music and counter cultures of the 1960s, he developed a unique contemporary language; his oeuvre revelled in psychedelic colour, biomorphic form and erotic innuendo. Drawing represented a particularly joyful element within the artist’s practice and throughout his career Price produced an extensive body of works on paper. With their fantastical compositions and brilliant colour palette they both echo and illuminate his sculpture. Drawn from a private collection in the US, the presentation occupies both gallery spaces and comprises over 180 works, spanning a period of more than 40 years. Hauser & Wirth is delighted by the rare opportunity to present such a large group of the artist’s work, introducing him to a country with a great tradition of ceramic art.

Central to Price’s development and maturation as an artist was his relationship with the city of Los Angeles as a creative centre. It was certainly fortuitous that Los Angeles had so many art schools for Price, who grew up as a surfer in Santa Monica and Pacific Palisades, to take advantage of. Also formative for his work were his close friendships with painters and sculptors such as Larry Bell, Ed Ruscha, Joe Goode, Edward Kienholz, John Altoon, Wallace Berman, and Billy Al Bengston. His conversations with these artist peers about politics, sexuality, and revolutionary materials in art, as well as the privileged connection they afforded him to the West Coast idioms of assemblage, Pop, figuration and abstraction, propelled his practice from an early age. The works on display are grouped chronologically, emphasising how the artist’s environment and travels influenced his creative discovery. Price emerges as a multi-faceted iconoclast, erudite and exuberant in both work and life.

The artist’s earliest recognisable body of work focused on the cup; neither wholly practical nor formal, they confounded his critics. Intimately-sized, whimsical, original: Price’s cups were fundamentally vehicles for his experiments in colour, form and decoration. For example, in ‘Round Snail Cup’ (1968), a curious snail perches on the side of terracotta glazed cup, peering cautiously around its circumference. The Cups series was largely motivated by a six-month trip to Japan in 1962. During his travels the artist was inspired by the modest proportions of Japanese tea ceremony vessels, particularly examples from the Momoyama period that favoured an unpretentious, rustic aesthetic. Price also cited Abstract Expressionist ceramic sculptor, Peter Voulkos, as a decisive influence. Price was taught by Voulkos whilst studying at the Los Angeles County Institute (now the Otis College of Art and Design) in the late 1950s. It was under his tutelage that Price developed a style that pitted colour and form against one another, eschewing his teacher’s large format for what he came to designate ‘hand-scaled’ works.

The series ‘Happy’s Curios” – named for the artist’s wife – was created between 1972 and 1977 and invokes the traditional crafts of Taos, New Mexico. In 1971, Price and his family relocated from Los Angeles to Taos and the move had a profound impression on his oeuvre. Restricted to an indigenous palette and effecting folk patterns, works from this period are deliberately timeless, evoking the spirit of the region in an unassuming, hand-held object. A long time admirer of artisanal Mexican pottery, the artist first became familiar with the genre during surfing trips to Southern California in the 1950s. Price and his friends made regular visits to the border city of Tijuana, where craftsmen from the Tonalá and Oaxaca regions of Mexico came to sell their earthenware. In New Mexico Price began to integrate the vernacular of his new locale into his practice, interrupting notions of cultural supremacy and continuing his interrogation of established sculptural modes. He said, ‘Coming to New Mexico influenced my work right away. Just before we left LA I’d been making some cups, so I tried to incorporate the New Mexico landscape into that idiom.’

The works Price produced in the 1990s – made alongside his son Jackson, who began to assist him in the studio – resemble the smoothed contours of a crater, their irregular forms composed of seemingly self determined, highly polished lumps and bumps. Painted a radioactive green, ‘Pastel’ (1995) appears almost alive, its throbbing surface perforated by an underlying layer of scarlet, while its geometric cavity hints at another dimension. Conversely, ‘Bubbles’ (1995), with its gold, matte finish dispenses with such a science-fictionesque narrative, instead playing with expectations of traditional bronze cast sculpture; the erotic curvature of its composition calls to mind the modernist line of a Henry Moore, or the precision of a Brancusi. At this point in time Price had moved back to Los Angeles where he assumed a professorship at the University of Southern California.

Drawing was essential to the development of Price’s sculpture. He hypothesised, ‘I think sculptors learn to draw so that they can see what they’ve been visualising. Most sculptors can draw pretty well, and they draw in illusionistic space, because if you can’t draw it, you can’t see it.’ From detailed volumetric studies like ‘Von Bayros Snail Cups’ (1968) – a meticulous greyscale illustration related to the Cups series – to vividly coloured watercolours, such as ‘Untitled’ (1999) – a west coast take on Hokusai’s ‘The Great Wave’ that harks back to the artist’s travels in Japan – drawing helped Price find the distinct artistic voice and precise sculptural finish for which he is so celebrated. ‘For real pleasure,’ he observed, ‘I’d like to draw all day (and listen to jazz). My happiest day is when I have no business, visitors, or phone, and can draw.’

The exhibition is accompanied by a monograph featuring a foreword by curator Paul Schimmel, in addition to a newly-commissioned scholarly essay from Sam Thorne, Director of Nottingham Contemporary. ‘Ken Price: A Survey of Sculpture and Drawings’ is produced by Hauser & Wirth Publishers and co-published with Prestel.