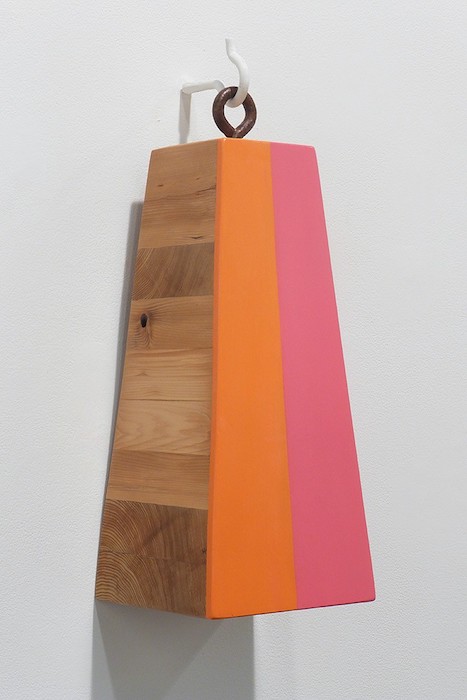 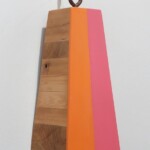 While color and form have remained a constant in Kevin Finklea’s wall sculptures, his latest body of work takes a leap in both hue and contour. The exuberant, indefinable palette applied to the irregular wooden forms is not meant to be read as minimal painting, nor is color meant to merely co-exist with the objects. Each element questions the other in an eccentric balance that emphasizes shifts in perception.

Finklea skillfully refines his wooden shapes from poplar, fir and sapele offcuts. They range in size from several inches to several feet, with a predominate geometry of intersecting planes and tapering wedges. Arcs or curves frequently soften one facet of the object. Where the surfaces are not painted, glimpses of rich woodgrain emphasize the tactile solidity of the underlying objects. The forms hang directly on the wall or are suspended from screw eyes on the top of the work, with some pieces projecting perpendicularly out into space, some reclining slightly against the wall, and others running parallel like a hovering beam. The slightly odd angles at which the pieces float reflect Finklea’s interest in untethering his forms from gravity and weight.

The sculptures seem both solid and in flux, with elusive geometry and expanses of saturated, synthetic color creating a tentative equilibrium. The forms are difficult to perceive in a single glance because of the unusual contours and shimmering paint application. The complex, shifting forms only fully reveal themselves when viewed from different angles. Slight imbalances in the forms are countered by divisions in the painted areas. For example, boundaries of color may be level or plumb to counterbalance the off-kilter edges of the objects. Finklea also uses iridescent paint to create additional perceptual shifts. As the viewer’s angle alters, the iridescent regions change in value and color, alternately matching and contrasting the adjacent painted areas.