Kishio Suga – Not Being Present, Not Being Absent 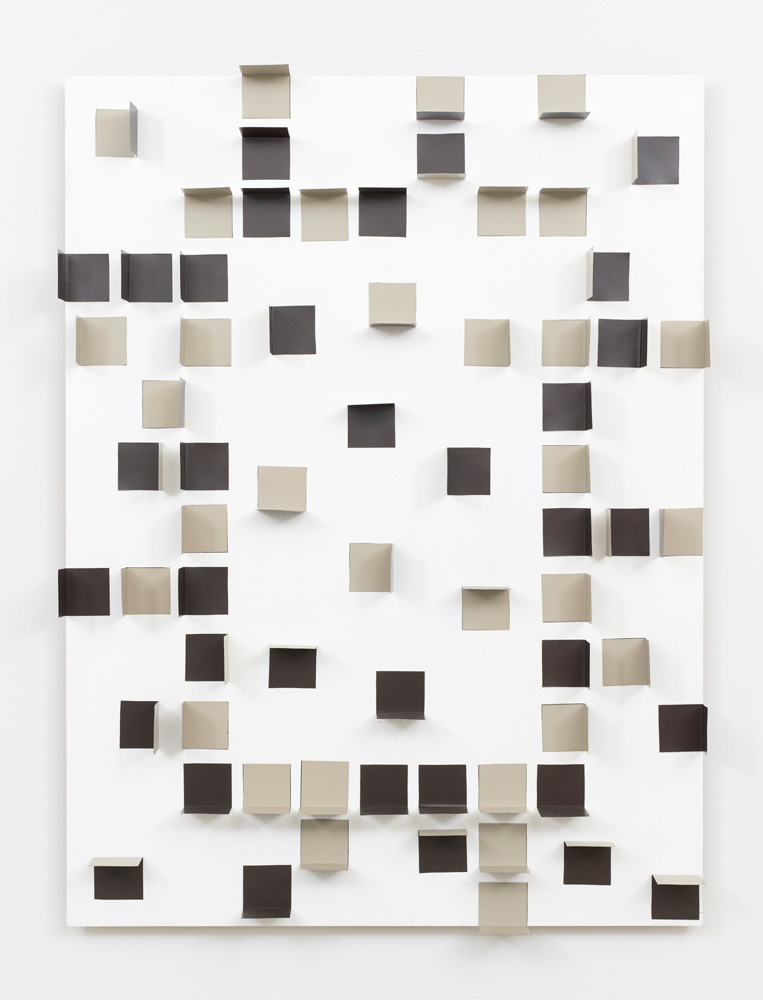 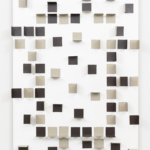 Tomio Koyama Gallery is pleased to present “Not Being Present, Not Being Absent,” a solo exhibition of works by artist Kishio Suga, a leading figure of Postwar Japanese art and a central member of the Mono-ha art movement that took place from the late 1960s to the 1970s.

While Suga has actively held exhibitions with the gallery every year, his interests differ on each occasion with intentions “not to do the same thing.” In the works introduced in this exhibition, he focuses on the concept of “not being present, not being absent,” and the notion that “things are impermanent and in a state of flux.” Presented is a new installation using the entire room at the back of the gallery space, as well as a selection of the artist’s latest three-dimensional works installed on the wall.

About Kishio Suga and the Production of his Work: “All Things are in a Relationship of Equality” – Continuing to Explore Unique Forms of Artistic Expression Through his Own View of Nature and Perception
Since he was a student at Tama Art University in the 1960s, Suga had felt a sense of crisis that simply following the trends and practices of overseas would lead to a bleak future for Japanese art, and thus continued to seek out forms of artistic expression that were both unique to Japan and himself.

Suga, was greatly inspired by the work “Untitled (Cavalli)” (1969) by artist Jannis Kounellis, who at the time was a key figure associated with Italian art movement “Arte Povera.” This work, in which twelve live horses were tethered to the walls of the gallery, led Suga to “the realization that one was able to employ one’s view of nature and way of perceiving things for one’s art.” At the same time, he resonated with the aesthetics and philosophy of Japanese landscape architect Mirei Shigemori, the ideas and concepts of the Kyoto School, and Indian Madhyamaka Philosophy, yet nevertheless paving his own unique path.

Employing “things” such as wood, stone, metal, and rope, Suga highlights the profound existence of “things” through the slight deviations that arise due to subtle acts on intervention that include cutting, bending, arranging, and stacking. Furthermore, considering sites such as wooden frames, boards placed on the floor, window frames, the entire room, the water’s surface, and external space as “frames” for the work, he arranges things in places that enable them to maximize their existence and effect. Conceived in this way, Suga’s works come to present new scenes and situations that we have never witnessed before.

The idea of maintaining an equal relationship with everything through turning one’s eyes to “things” themselves, which until now had only been regarded as materials for work, as well as humans who perceive those “things,” also reflects the universal ways in which we must confront and engage with the world in order to live.

Suga has presented work on over 400 occasions in numerous exhibitions both within Japan and abroad, receiving high international acclaim for the sheer immensity of his world of work. His works are currently housed in 47 prominent museums and art collections throughout the world including The Museum of Modern Art, New York (MoMA), Centre Pompidou, Tate Modern, The Museum of Modern Art Tokyo, and the Museum of Contemporary Art Tokyo.

On the occasion of the large-scale exhibition, Kishio Suga: The Existence of “Things” and the Eternity of the “Site” held until February this year at the Iwate Museum of Art in Suga’s hometown of Morioka, art critic Akira Tatehata had described Suga as being “one of the most well-rounded and flexible of the Mono-ha artists.”
Today, even at the age of 78, the acuteness of Suga’s thinking and passion for creating work only continues to increase.

About the Exhibition and the New Works: Everything is Changing Towards Absence” – Art that Enables One to Perceive Things and the World
Suga’s latest work “Interstitial Scenery” simply consists of a number of small, galvanized metal sheets folded at right angles, arranged in various directions on a white panel. Nevertheless, the overlapping of their slight deviations that almost appears to harbor some sense of order, the combination of different materials, and the shadows created by them, are all intricately intertwined, surprisingly giving rise to a rich scene that serves to transform the surrounding space.

Suga has written the following statement in correspondence to the exhibition
If some thing is there, it comes into view regardless of whether one is particularly aware of it or not. Any consideration for using what one has caught sight of for some purpose or another would indeed necessitate further investigation. Should one determine that it could be of use, one may take it in hand and observe or gaze upon it from various directions and angles. That is, to confirm whether or not it could be used for the purpose one envisions. As long as it is a substantial entity, the existence and reality of the “thing” itself comes to the fore of one’s thoughts and contemplations. Under such circumstances, one leaves the thing close at hand for the time being until one discerns a possibility for its use. One waits until it rests naturally within one’s consciousness. One may forget the existence of the thing while waiting, or the reality that one requires may perhaps become lost over time. Such is the nature of things. That is why one must always assume a “state of absence,” and for this reason it is necessary to determine the peripherals by which the thing is supported. However, no matter the circumstances, one must not fixate on the thing itself. Things are always within a passage of time that is different from human perception. Things do not correspond to people, but correspond to realms of presence and absence.
Kishio Suga

Philosophical thinking regarding the nature of existence is that which is essential to Suga’s work. What is particularly significant is the “doctrine of the void” observed in Indian Madhyamaka Philosophy.

“Void” refers to the fact that “everything that exists has no essence of their own.” Suga explains that just as plant seeds no longer maintain their presence as seeds yet are inherited as life, all things are in a constant state of flux, which is indeed only made possible through interrelationships.

Suga takes the time to re-question the meanings of “things” that have been familiar to him, and releases them from their existing situation. In this way, the galvanized metal sheets, wood, and stones support one another other within the work, vibrantly creating scenes and situations like never seen before. The appeal of Suga’s work is the manner in which they enable us to perceive and become aware of the relationships between people and things, and people and people.

“Various protrusions and retractions can be observed on the walls and on the ground. An important element of my work is that parts of things emerge within space. I feel that such undulations, or unevenness of sorts in the space serve as an impetus for contemplation.” *2

“In the case of both things and people, no matter how great or magnificent they may be, it is ultimately their destiny to return to nothingness. Then, at the very least, I would like to turn my awareness towards this process of progressing towards nothingness in hopes to recognize its presence and feel a sense of reality. I have always considered art as an effective means to perceive things, and I continue to hold on to this belief.” *3

The world is indeed far more endless, yet it is not possible to see it without perceiving it. Suga instills us with a fundamental awareness for the aspects we tend to overlook, and continues to question and explore the world through means of art.
“I believe that perceiving the world in such a rich way leads to the richness of humanity.” *4
A historical artist of our times, Suga has been active at the forefront for over 50 years and continues to produce works that permeate with an air of contemporaneity. We welcome viewers to embrace this opportunity to engage with Suga’s latest artistic endeavors.

*1, 3, 4 Hiroyasu Yamanouchi, “A Visit to Kishio Suga’s Studio: ‘There are Countless Movements, Actions, and Conditions in Everyday Life that Can be Developed into Art,’” Bijutsu Techo (web version), February 2022.

Kishio Suga was born in Morioka city, Iwate Prefecture in 1944. In 1968 he graduated from the Department of Painting at Tama Art University, and served as a central member of the art movement Mono-ha that took place from the late 1960s to the 1970s. For over 50 years since, Suga has continued to pursue a consistent philosophy and actively develop his artistic practice, paving his own unique path as one of the leading figures of Postwar Japanese art in our times. Even in recent years when the reevaluation of Mono-ha has been gaining much international recognition, he persists in further deepening his contemplation, with his unfaltering passion and enthusiasm for his practice serving to define the presentness of his work.

Since his first solo exhibition in 1968, Suga has presented work on over 400 occasions in numerous exhibitions both within Japan and abroad. Recent years in particular have seen remarkable developments and achievements in his career. In 2016 he held solo exhibitions at Pirelli Foundation’s HangarBiocca in Milan and Dia: Chelsea New York, in addition to a two-person exhibition with Karla Black at The Scottish National Gallery of Modern Art in Edinburgh. He was selected for the 57th Venice Biennale, “VIVA ARTE VIVA” in 2017, receiving high acclaim for Law of Situation in which he recreated of one of his early representative works in the form of an installation floating on water. In that same year Suga participated in the group exhibition “Japanorama: New Vision of JAPAN from 1970,”curated by Yuko Hasegawa that was held at the Centre Pompidou-Metz in France.

Suga’s works are also housed in numerous prominent museums throughout the world including the Centre Pompidou, Dia: Chelsea, the Tate Modern, Dallas Museum of Art, M+, The Museum of Modern Art, New York, Guggenheim Abu Dhabi, The Scottish National Gallery of Modern Art, and the Museum of Contemporary Art, Tokyo.