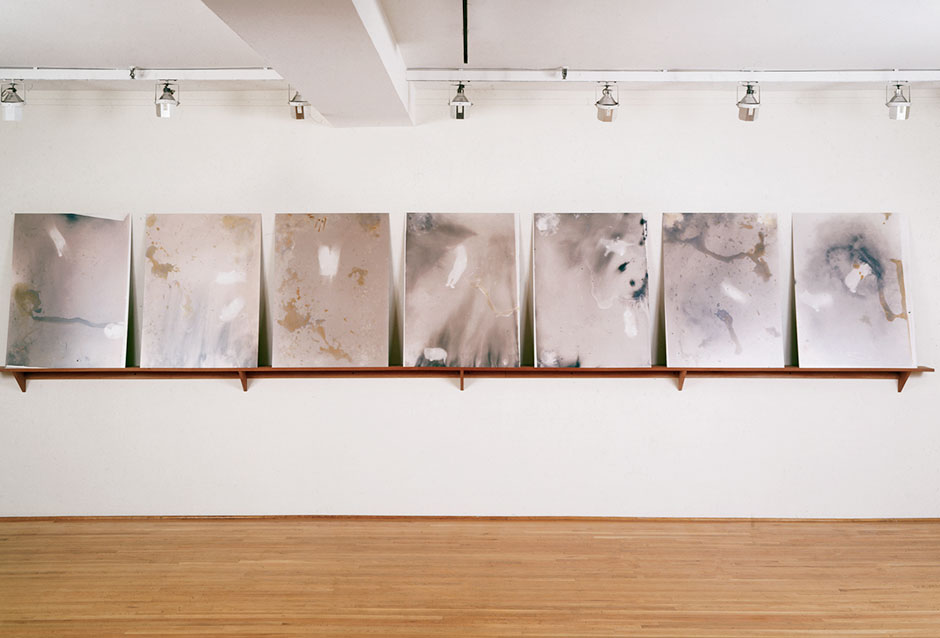 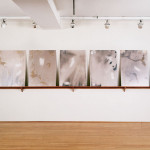 Taka Ishii Gallery is pleased to present “Little Families; Fixity of Nature, 1992-2001,” a solo exhibition of works by New York-based artist Kunié Sugiura. Sugiura has constantly continued to explore a diversity of photographic expressions over the past 40 years of her artistic career, spanning from experimentations with color photography in the 60’s, the “photo-painting” series that combine acrylic paint with photography on canvas in the 70’s, to her photo collages created through juxtaposing fragments of photographs. The exhibition marks Sugiura’s second solo presentation at Taka Ishii Gallery, and features a selection of photograms produced by the artist in the 1990s.

The Kitten Papers
Two kittens were left on the photographic paper corralled overnight in the darkroom. In the morning, the paper was exposed, fixed. The procedure, repeated nighty for one week, became “The Kitten Papers.” (May 1992)

Sugiura began producing photograms in the 80’s, which have ever since become one of her most representative series of works. The photograms remarkably depict the artist’s consistent themes of time, the circumstances of such phenomena that are naturally induced through means of coincidence, as well as the facticity, fortuity, and contingency of their documentation. The photograms entitled, “The Kitten Papers” serve as a sustained record of time conveyed through the transience of the kittens’ movements overnight and the traces of their sleep. In addition, the imagery conceived as a result of the unpredictable movements of animals including frogs in the work “Hoppings” and snails in “Snails,” are only obtained through fortuity between the artist and such images created by natural coincidence; essentially described by Sugiura as “a mutual agreement between nature and myself.” Photograms consist of a combination of distinguished negative and positive imagery, and while respectively being shadows of ‘objects’ created through intercepting light, inspire a new stream of imagination in the viewer as they are seemingly instilled with impressions different from the very things they convey.

The sole elements the artist has chosen for the production of the photograms are light, photographic paper, plants, animals, and everyday objects that serve to intercept the light source, as well as the chemicals used to fix the images. In this respect, the images are conceived through a minimalist approach that utilizes the least amount of materials and techniques. Through inheriting such methods appropriated by the likes of Moholy-Nagy and Man Ray, and further by entrusting the motifs with the capacity to formulate the works, Sugiura succeeds in extemporarily and constructively visualizing her concepts from the catenation and overlapping of various abstract forms. Despite embodying contemporaneity, the works evoke feelings of beauty in their unfinished and empty spaces, and give rise to a fleeting and delicate sense of transience that unknowingly disappears with time.

Kunié Sugiura received her BFA from the School of the Art Institute of Chicago (SAIC) in 1967. While attending SAIC Sugiura studied under the conceptual photographer Kenneth Josephson, and eventually moved to New York where she currently remains based. Sugiura’s major solo exhibitions include “Time Emit”, Visual Arts Center of New Jersey, Summit, New Jersey (2008) and “Dark Matters / Light Affairs”, The University of California, Davis (2001). She has received the Higashikawa Prize (2007) and the Artist’s Fellowship, New York Foundation for the Arts (1998). Her works are included in the permanent collections of the Denver Art Museum; The Museum of Fine Arts, Boston; The Museum of Modern Art, New York; and the Tokyo Metropolitan Museum of Photography.