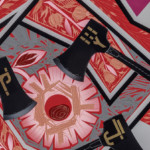 Regen Projects is pleased to present an exhibition of new paintings by Lari Pittman. On view will be a series of twelve portraits of textile fabrics arranged alongside their corresponding human portrait. This marks his eighth solo presentation at the gallery.

Over the course of his decades-long career, Pittman has developed a singular visual aesthetic that has established him as one of the most important painters of his generation. His intricately constructed and multi-layered works draw on the history of painting with an emphasis on decoration and the applied arts. Pittman’s signature style utilizes various methods of applying paint to the canvas, ranging from stencils to spray to unadulterated applications of the medium. Each work features a glossary of decorative marks, codes, and signifiers. This body of work is inspired by such diverse sources as the interdisciplinary practice of Sonia Delaunay, Alastair Morton of the Edingburgh Weavers, and the scenic and costume designs of Natalia Goncharova. With each painting, Pittman asks the viewer to question what constitutes a portrait and what differentiates it from a still life.

Featuring dramatic shifts in scale, each individual textile depicts and is titled after a specific type of fabric, such as brocade, taffeta, silk, and toile. The overall composition of the textile portraits hone in on the intricate construction of the fabric and repeat their inherent pattern, evincing an internal logic unfolding to the edges of the canvas, and extending beyond the picture plane, seemingly ad infinitum. Despite their titles, the individualized aesthetic of Pittman’s images evoke a meaning that belies facile comprehension. The reiterated patterns evident in the textiles are punctuated with a coded language existing simultaneously amongst a top layer of tropes of violence in the form of scythes, tomahawks, fish hooks, and hedge clippers. Each discernible tool serves as an instrument of activization in the autonomous world of each image.

Similar to the portraits of textiles, Pittman’s images of humans – Pathos, Ethos, Logos, Kairos – indicate a cultural moment and a concern with hyper individualization as a byproduct of late capitalism. Eschewing simple classification and definable genders, each subject is rendered in a specific color palette that is in direct conversation with their partner textile, implying an act of courting or avarice. The high level of ornamentation of people and their textiles stands in contradiction to the depicted fatigue on their faces. The mutability between animate and inanimate creates a continuous shift in focus, presenting a dematerialization of the background and the subject’s face, allowing the fore and backgrounds to become one.

Lari Pittman (b. 1952) lives and works in Los Angeles, CA. Selected solo exhibitions include “Mood Books”, Huntington Library, Art Collections, Special Collections, and Botanic Gardens, San Marino (2016); “A Decorated Chronology”, Contemporary Art Museum St. Louis (2013); Le Consortium, Dijon (2013); Villa Arson, Nice (2005); Institute of Contemporary Art London (1999); and Los Angeles County Museum of Art (1996). His work will be the subject of a major retrospective exhibition at the Hammer Museum in Los Angeles, opening in the fall of 2020. He is a Distinguished Professor in the Department of Art at the University of California, Los Angeles.