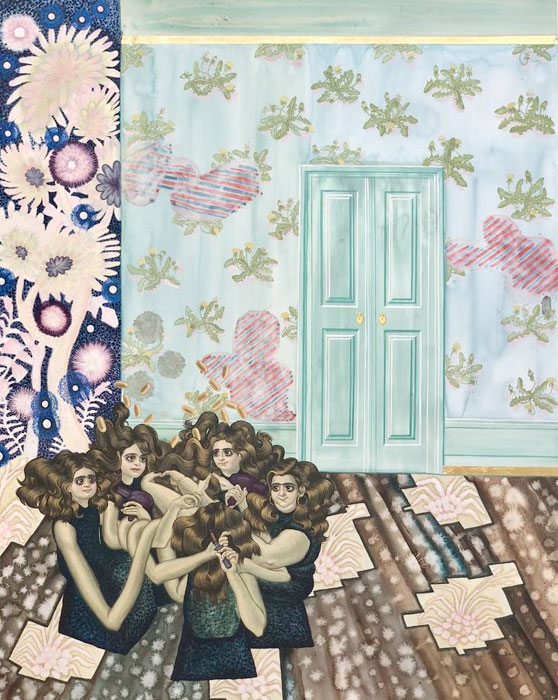 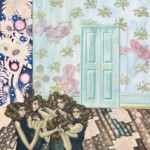 For this exhibition, Bates continues her investigation of identity, confused hybridity, and loss, focusing on cultural displacement and the artists’ own personal history. Bates, raised by an American father after losing her Costa Rican mother in infancy, questions what it means to be multicultural, and more specifically, how losing the conduit to that culture raises questions of authenticity and belonging. Her paintings explore what it means to be an “imposter”, someone who exotifies and falsely idealizes their own lost culture because truly belonging seems out of reach.

The intimate paintings on view, made of 22K gold leaf, mother-of-pearl and gouache, reflect the past, present and the imagined through a postcolonial narrative. These materials reference the global trade routes of the 17th century, in which textiles, laquerware, and porcelains were imported from Asia, highly prized, and imitated by Spanish and indigenous artisans in the Kingdom of New Spain (Latin America) and Colonial America. Bates explores the visual language created when something is copied, but changed in the process by the imitator. Gold leaf references both the economic history of silver mining in the Americas, and Mexican imitations of Japanese Screens, or Biombos – here, a metaphor for the hybrid space occupied by multicultural individuals. Floral patterns refer both to the plants surrounding Bates’ childhood home in Costa Rica, as well as textiles woven to imitate imported textiles from Southeast Asia. The use of mother of pearl is influenced by Enconchada painting, a technique involving mother-of-pearl inlay, inspired by imported Japanese laquerware. As objects were recreated, they were imbued with native materials and handicrafts, raising questions of cultural ownership, authenticity, and hybridity.

Bates’ paintings are dominated by a conflicted sense of identity and belonging, but they are also humorous and strange, even otherworldly. Imagined Waspy and formal Latina characters drink tea amid tropical landscapes populated by animals native to Costa Rica. While in the painting, “New Pro V Latin X Formula, For Latin X So Healthy It Shines” (2018), inspired by a 1996 Pantene commercial, young Latina girls infuse their hair with gold gel caps, as though the promise of personal transformation and cultural authenticity could be consumed and realized. The exaggerated hair and elongated limbs symbolize the entanglement of family and the desire to connect and reach back through time. Bates’ influences range from 1930’s surrealist painters such as Remedios Varos (1908-1963), Dorothea Tanning (1910-2012) and Maruja Mallo (1902-1995) to the anti-minimalist interior designs of Dorothy Draper. “Biombo” beckons the viewer to slow down and engage with the work as it slowly unravels.

Larissa Bates (b. 1981, Burlington, Vermont) received a BA from Hampshire College, MA. In 2014 she was an Artadia Awardee. Recent group exhibitions include “Indulge”, curated by John Wolf, Los Angeles, CA; Taymour Grahne Gallery, NY; DC Moore, NY; and Monya Rowe Gallery. Her work has been reviewed in The New York Times, The New Yorker, Artfourm, among many others. Bates lives and works in Hastings-on-Hudson, NY.