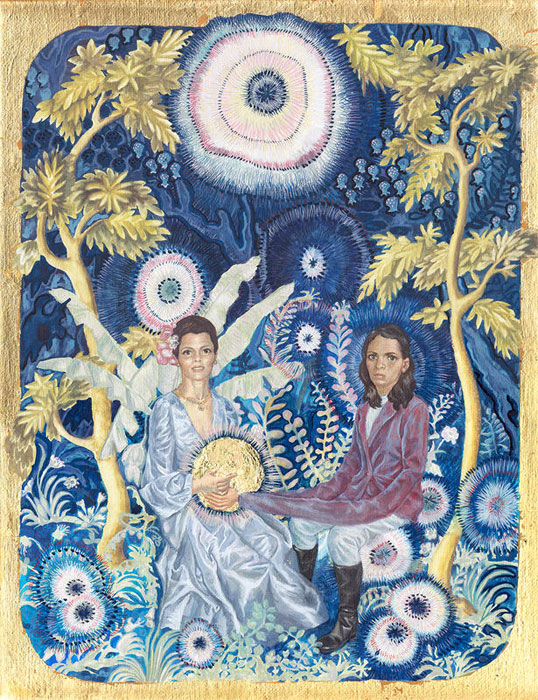 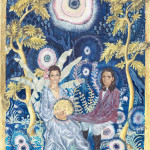 “The banana leaves make me think of tropical textiles in tourist rentals in Central America. The WASP/Latina textile crossover. I imagine a bunch of WASP’s wearing banana shirts and dresses while drinking gin and tonics overlooking a sunset, a paradigm that I strangely fit into, now more gringa tourist than tica, in the land of my childhood and my mother’s birth country.” – Larissa Bates

“Mama Lengua: Mother Tongue” features a series of new small-scale paintings by Larissa Bates exploring identity, loss and class. The works, most no larger than 12 by 9 inches and painstakingly detailed using gouache and gold leaf, range from landscapes and still lifes to interiors and family portraits. As the title suggests, family and cultural identity plays a large role. How does ones’ background shape their identity? In this case, the artist focuses on Costa Rica and her families’ involvement with the United Fruit Company; even though Bates’ mother is from Costa Rica, she herself has not spent a large amount of time there. There is a conflicted sense of identity and guilt permeating throughout. The United Fruit Company brought jobs and railroads to Costa Rica, but with modernity came doom. The land and workers were exploited and Costa Rica became a tourist destination for the wealthy as the natives became poorer and lost control of their own country.

Gold leaf, deliberately 22 karat, is employed to symbolize religious icons as well as the economic history of gold in Spain; bulb plants, such as daffodils, indigenous to New England, symbolize Colonialism. In “Land of Vanity And Delusion: Pearls, Gold, Bananas And Baseballs” (2015), tiny pearls and baseballs are ambiguously scattered within a surreal pastel-colored landscape suggesting the Neo-Colonial role of the Untied States in Costa Rica and illuminating hypocrisy.

Bates’ paintings merge art history, Brooks Brothers-inspired patterns and a highly personal narrative. All these intriguing facets make it so enigmatic. In “Ubume as Twin Gestational Carriers After The Two Fridas” (2015), the artists’ mother replaces Frida Khalo amid a tropical landscape reminiscent of Charles Burchfield. There is a longing and quiet sadness within these paintings, but a utopian curiosity, and even humor, is the prevailing tone. Bates’ paintings are unabashedly ornate, vibrant and – strange.

Larissa Bates received a BA from Hampshire College, MA. Her work is included in a group exhibition at deCordova Sculpture Park and Museum, Lincoln, MA from June 11 – June 30, 2015. Other recent group exhibitions include Boston University, Boston, MA; bk Projects, Boston, MA; The College of New Rochelle, Brooklyn, NY and Monya Rowe Gallery. She is a 2014 Boston Artadia Awardee. This is her sixth solo exhibition at Monya Rowe Gallery. Bates lives and works in Boston, MA.

10% of sales will be donated to The Greenhouse Hunger Project.