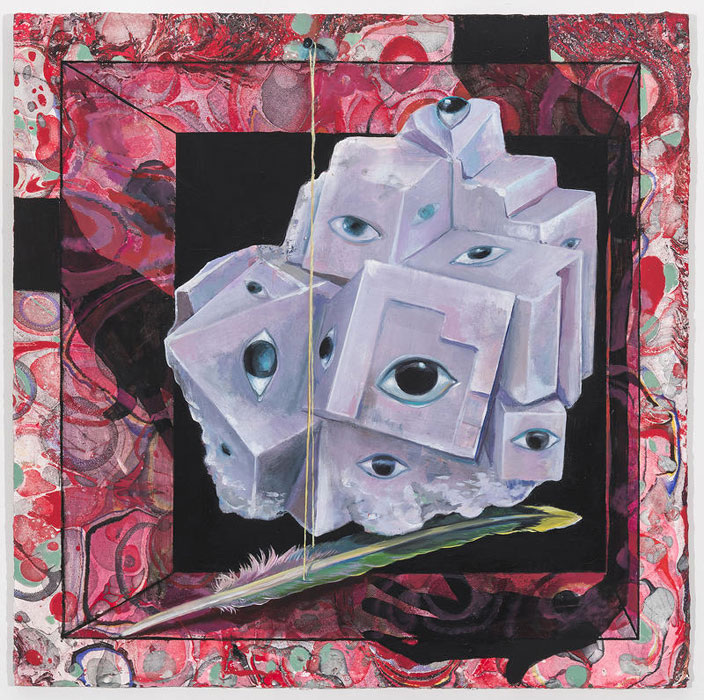 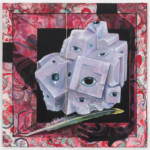 Monya Rowe Gallery is excited to present a solo exhibition of new paintings by Laura Greengold titled “Spooky Action at a Distance”.

This exhibition takes as its point of departure stories told to Greengold by her grandmother, a Holocaust survivor, which inspired the artist to create a body of work exploring moments from the past and present. Honing in on the modern condition, Greengold examines fear and anxiety, but not without healing and hope.

Greengold’s illusionistic shadow box paintings could be considered still lifes of a moment in time. The artist captures a fleeting feeling or an experience by depicting metaphorical objects akin to the long tradition of Still Life painting combined with a technique known as Turkish marbling. Greengold pours paint into a water tray where patterns are created as a result of color floating on water.

Traditionally, paper is placed into the water solution, but Greengold uses a wood panel. On the choice of this technique, Greengold says: “The marbling was also influenced by one of my all-time favorites, Jackson Pollock. His way of painting achieved the removal of his hand from the surface but not a removal of his body, the gracefulness of this larger movement. I wanted to make my paintings out of something that touched on the gracefulness that comes from movement.”

In “Light as a Feather, Stiff as a Board (Bergen-Belsen 1944)”, (2018), surrealism takes center stage as a salt rock with eyes gazes at the viewer. Inspired by Juan Sánchez Cotán (1560-1627), a feather hangs from a string, depicting the importance of the weight of each object. Like Meret Oppenheim, Greengold transforms objects into playthings of the mind.

In “Thick Potato Peals Make a Meal, When The Eyes Don’t See You Steal (Braunschweig 1945)” (2018), a still life of a potato peel and flowers, Greengold loosely connects the history and function of still life paintings in Pompeii (an ancient Roman city, where guests were greeted with depictions of food as a way to communicate welcoming and what is available in the area to eat) to the story of her grandmother as a starving prisoner cleaning Braunschweig, where the towns people would leave bits of food waste to help nourish the prisoners. In “Each Dark Place, I Keep a Space (Bergan-Belsen 1945)” (2018), Greengold is inspired by Rene Magritte’s (1898-1967) “One-night Museum” (1927), but here the four-part compartmentalized composition is void of objects except an illegible letter. The psychology is intensified by the missing parts and the artificiality of an image is emphasized.

Through the seamless integration of techniques, art history and subject matter, Greengold’s unique and powerful paintings are inherently political. In “Train to Nowhere” (2018), the water lilies are a metaphor for survival (water lilies are a hardy plant that have adapted to keep their heads above the water). Flowers are used throughout the exhibition as a symbol of a life force and salt is depicted as a metaphor for healing. As we move through an era of increased school shootings, racism and xenophobia, Greengold reminds us to reflect, and more importantly, to embrace healing actions and optimism.

Laura Greengold (b. 1976, New Haven, CT) received a MFA from Yale University, New Haven, CT and a BFA from The School of the Art Institute of Chicago, Chicago, IL. She was awarded The Alice Kimble English Traveling Fellowship (Hungary) from Yale University in 2000 and a Vermont Studio Center Fellowship in 1999. This is her first exhibition at Monya Rowe Gallery. Greengold lives and works in Brooklyn, NY.