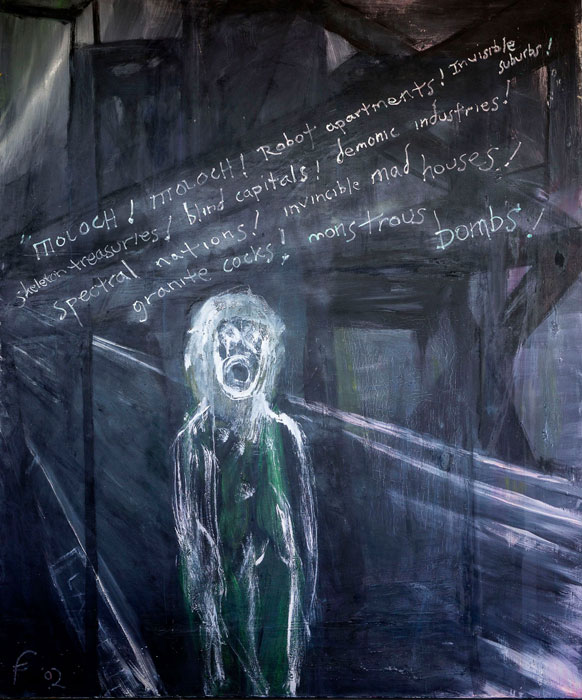 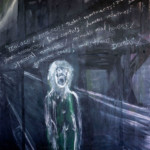 “I never wanted to be a poet; it chose me, I didn’t choose it; one becomes a poet almost against one’s will, certainly against one’s better judgement. I wanted to be a painter, but from the age of 10 these damn poems kept coming. Perhaps one of these days they will leave me alone and I can get back to painting.” (Lawrence Ferlinghetti)

Rena Bransten Gallery is pleased to present a solo exhibition of paintings by Lawrence Ferlinghetti. Artist, writer, publisher, activist, and San Francisco legend, Ferlinghetti has been painting with the eye of a poet for over six decades. Throughout his career in literature and decades long affair with the written and spoken word, Ferlinghetti has maintained a visual art practice charged with his spirit, political convictions, and humanism. Ferlinghetti’s paintings possess an awareness and depth that could only have been born of a life as rich and complex as his – he experienced the horrors of WWll first hand, (resulting in his “radical pacifism”), played a prominent role in the San Francisco Renaissance, and has been a social and environmental activist and advocate of his adopted home of San Francisco since moving here in 1951.

This collection of works looks at Ferlinghetti’s world of love and war, and the images are at once haunting and hopeful. The recurring motifs he uses – water, birds, text, the human form – are intricately linked to his life and experiences, and together move with beautiful fluidity.

Lawrence Ferlinghetti was born in New York in 1919. He attended the School of Journalism at the University of North Carolina, Chapel Hill and earned a M.A. at Columbia University and a doctorate in literature at the University of Paris. During the Second World War he spent four years on U.S. Navy ships and commanded a U.S. Navy sub chaser at the Normandy invasion, and saw Nagasaki six weeks after the atomic bomb had been dropped. He first started making visual art while living in Paris in the late 1940s where he began drawing from the model, a practice he has continued since moving definitively to San Francisco in 1951. He co-founded City Lights Bookstore in 1953. His work has been exhibited both nationally and internationally, including a 2010 retrospective at the Museo di Roma in Trastevere, Italy, and will be featured in an upcoming group exhibition at Centre Pompidou in Paris. His works are in the collections of the Smithsonian Museum of American Arts and the Fine Arts Museum of San Francisco. He lives and works in San Francisco.