Lawrence Weiner – MADE TO BE 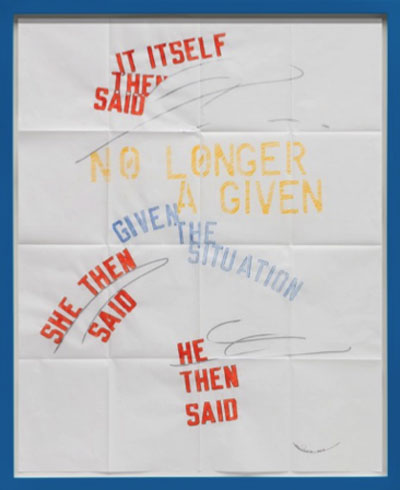 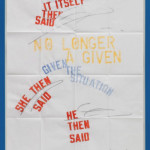 Regen Projects is pleased to announce “MADE TO BE”, an exhibition by New York-based artist Lawrence Weiner. This marks his ninth solo presentation at the gallery; his first, “ASSUMING THE POSITION”, was our inaugural show in 1989.

ALL ART IS MADE BY HUMAN BEINGS TO SHOW SOMETHING TO OTHER HUMAN BEINGS, ERGO – MADE TO BE
(Lawrence Weiner, 2016)

One of the leading figures of the Conceptual art movement of the 1960s, Lawrence Weiner’s seminal and singular practice uses language as material, challenging and redefining the limits of what an artwork is and can be. Intrigued by the dialogue in the art world related to the fundamentals of sculpture and of art-making itself, Weiner made the decision to shift his practice from object making to producing text-based work with his 1968 precept:

1. THE ARTIST MAY CONSTRUCT THE WORK
2. THE WORK MAY BE FABRICATED
3. THE WORK NEED NOT BE BUILT

Weiner has also said about our exhibition that:

In her essay for the catalogue accompanying Weiner’s 2007 survey exhibition “AS FAR AS THE EYE CAN SEE”, curator Ann Goldstein notes that

“Weiner’s employment of language allows the work to be used by its receiver. It is purposely left open for translation, transference, and transformation; each time the work is made, it is made anew. Not fixed in time and place, every manifestation and point of reception is different – each person will use the work differently and find a different relationship to its content: ‘One of the reasons I chose to work with language and with other materials is that each time a piece can be built anew. Language is less imposing – there is always an incomplete relationship to objects, rather than a complete, say, expressionist sort. As culture develops, the works change, or the culture begins to decay.’ For Weiner, the most successful works are those that ‘allow themselves to be reused or reworked. Not because of their historical placement but because of their content. I still believe that the content, not the context, is the reason for artists making art.”

He has been the recipient of numerous awards, including the Roswitha Haftmann Prize (2014); the Skowhegan Medal for Painting/Conceptual Art (1999); a Guggenheim Fellowship (1994); and two National Endowment of the Arts Fellowships (1976, 1983); among others.