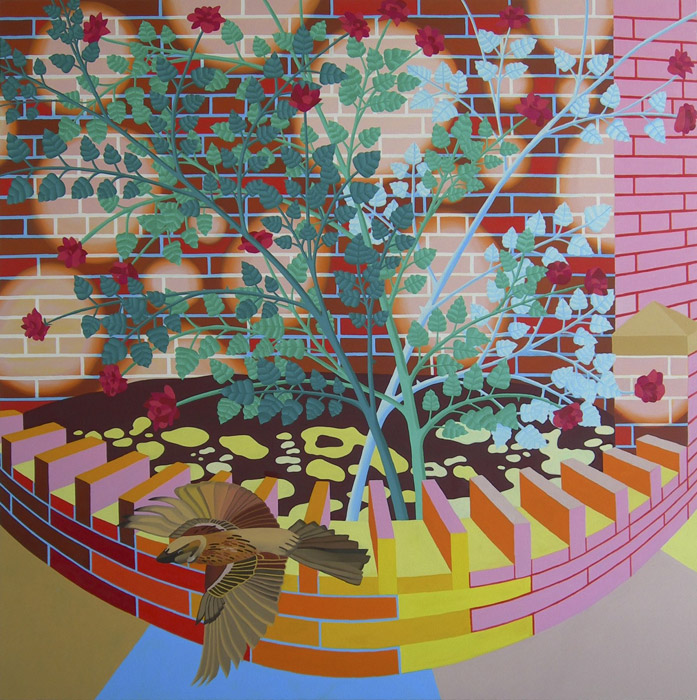 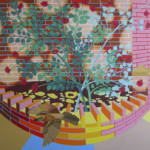 Leigh Ruple’s recent paintings depict scenes from the artist’s Brooklyn neighborhood. Ruple, ever interested in the possibility of profundity in the ordinary, gravitates towards sights that produce in her a longing to reimagine a grander, more fantastical narrative than what actually appears. Making rough drawings from memory and testing out different compositions and color ideas, she cycles through versions of a remembered scene before employing reference photos as a means to heighten the works’ realism and ensure that the details are convincing. In all of Ruple’s work, metaphor and meaning emerge from carefully orchestrated formal strategies including complex spatial arrangements and powerful color relationships.

The artist describes the act of painting as transformational, turning sight, and experience of the world into material image; idea into object. What becomes apparent, however, is that this transformation also takes place allegorically: rain drops become diamonds (as in “Diamonds”), bricks become aperture (“Ridgewood”), desolation becomes comedy (“Metropolitan Avenue”), possessions become moonlight (“Nightstand”), and vision becomes action (“New York”). All of this brings into question the solidity of the seen world, and the nuanced dynamics between observation and memory. In this sense, the paintings are not about loyalty to the particular place, but about being present and honoring the desire to simply look at one’s surroundings, wherever that may be. And, for Ruple, to ultimately make something out of them.

Leigh Ruple was born in Painseville, Ohio (1984). She holds a Bachelor of Fine Arts from The Cooper Union School of Art (2006) and Master of Fine Arts from Milton Avery Graduate School of the Arts, Bard College (2014). Ruple has shown in group exhibitions at Marlborough Chelsea (NYC), The Suzanne Geiss Company (NYC), and Halsey McKay Gallery (East Hampton, NY). Her work has been reviewed by Painting is Dead, Art F City, ArtForum, and Time Out New York, among others.