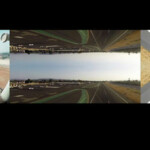 “Double Horizon” presents “Passage”, a new group of photographs that expand upon Lia Halloran’s “Dark Skate” series alongside the artist’s first immersive three-channel video installation, “Double Horizon” (2019), which offers footage of the artist aerially exploring the space above Los Angeles. Her ongoing investigations into the personal, physical, psychological, and scientific exploration of space are the primary focus of these new works as the viewer encounters Halloran both skateboarding the vast urban landscape of Los Angeles and flying above and around its dynamic terrain.

Halloran began “Dark Skate” in 2007 when her experiments with long-exposure photography of the night sky collided with her life-long interest in skateboarding. The process begins with location scouting and for these new works in “Passage” Halloran has sought out environments along the Los Angeles River that reference the relationship of the city to its water use, an intrinsic and highly mediated aspect of the its identity. Setting up a camera in the middle of the night, “I attach a light to a fixed point on my body, skateboard in the dark and incorporate the line my body traverses within the landscape. The resulting photographs are urban environments paired with lines of light that behave like physical objects, written language or break apart into a flurry of abstraction.” This process creates a landscape drawing recorded in both time and space that reveals a free-flowing beam of light limited by the physics of skateboard movement within the selected environment. Ranging from a few minutes to three-quarters of an hour, each large-format frame of film captures Halloran performing in both public and private space. Without a trace of her body recorded, the viewer sees the artist’s presence simultaneously throughout the landscape – the documentation of solitary and nocturnal improvisations.

A decade after creating the first “Dark Skate” photographs, Halloran embarked on a new relationship with space – she learned how to fly a plane. Shot over two years, Halloran filmed more than thirty flights, recording each journey with four mounted cameras as she explored the greater Los Angeles area from downtown to Catalina Island and all the highways and suburban valleys in between. While skateboarding offers microcosmic views of overlooked corners of the city, flying allows for an exaggerated zoom out and the possibility to understand it from a more generous perspective.

Halloran presents three views of movement simultaneously, swallowing the viewer into a cockpit of the scenic and creating a heightened experience of disorientation through the use of a dynamic original composition by Allyson Newman and an affective mirroring effect – the landscape repeatedly collapses into itself, which allows the viewer to toggle between geographic recognition and introspective exploration perforated by seemingly miraculous glimpses of other airplanes or birds in flight.

“Double Horizon” is an homage to Los Angeles, to exploration, and to wandering. Halloran traverses the landscape in ways most won’t and asks the viewer to reflect on the poetic nature of the body’s relationship to its environment. Through her documentation of intentional experience, Halloran offers a phenomenological adventuring with the ability to lose consciousness or existence and find it again.

Lia Halloran (born 1977, Chicago, IL) received a BFA from the University of California, Los Angeles in 1999 and an MFA in Painting and Printmaking from Yale University in 2001. Presently, she is working with Nobel Laureate Kip Thorne on a book about the warped side of the universe and her work is currently on view at the Norton Museum of Art, West Palm Beach, FL; Frank M Doyle Arts Pavilion, Orange Coast College, Costa Mesa, CA; and at Los Angeles World Airports (LAWA) in conjunction with City of Los Angeles Department of Cultural Affairs (DCA). She is the recipient of various awards including a 2018 LUX Art Institute Artist Residency and exhibition, Encinitas, CA; 2018 Artist Residency at the American Natural History Museum Astrophysics Department, New York, NY; 2018 Pioneer Works Artist in Residency, Brooklyn, NY; and a 2016 Art Works Grant from the National Endowment of the Arts for the project “Your Body is a Space that Sees”.

Halloran lives and works in Los Angeles and serves as Associate Professor of Art and Director of the Painting and Drawing Department at Chapman University in Orange, CA.