Liz Larner – As Below, So Above 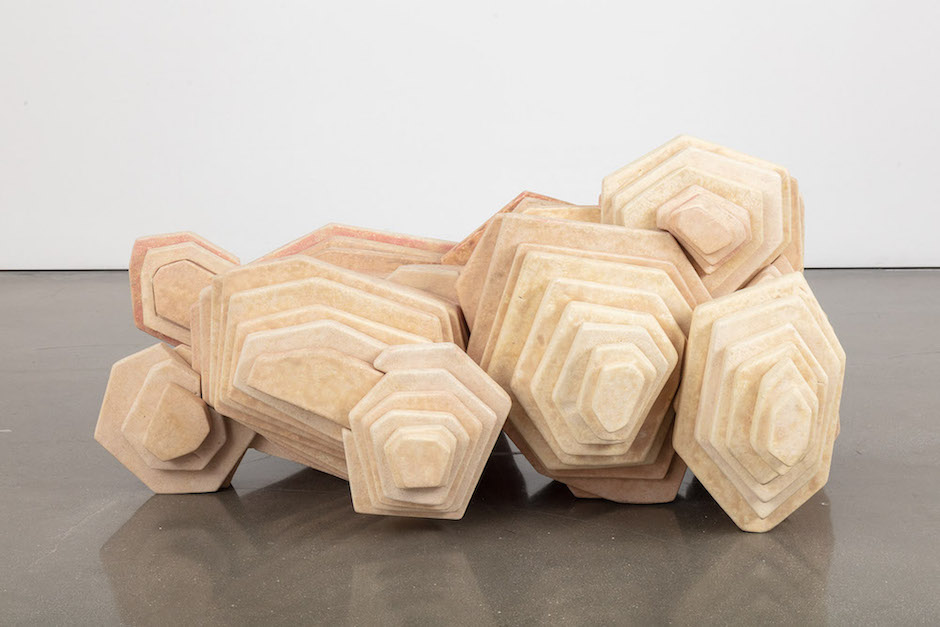 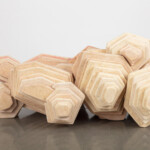 Regen Projects is pleased to announce “As Below, So Above”, the seventh solo exhibition by Los Angeles-based artist Liz Larner. On view will be a selection of new works that demonstrate her ongoing examination into sculpture, painting, drawing, and ceramics. The environment – the personal and the entrenched – are set together in these artworks that reach for an understanding of vulnerability through what is and has been considered low and directed, made capital of, and endangered.

Illusion and reality are intricately intertwined in Larner’s work. At first glance “Firestone” appears as a large enigmatic composition of stone placed in the center of the gallery. Upon closer inspection the corporeal structure of the three dimensional form reveals its construction through numerous ceramic pieces in the shape of tessellated hematite crystals. Referencing the art historical trope of the Odalisque, this is an eco-feminist interpretation of the supine figure and the hexagonal crystal always found with iron.

Larner’s interest in fragility and nature in the anthropocene is further manifest in “Reef”, an open ended, cay-shaped large format sculpture that snakes along the gallery floor. Free formed around and with deposits of stone and mineral, the work appears to float just above or slightly below the surface of the imaginary water that surrounds it. The illusory perception of its totality engages the viewer to circumambulate its contours and navigate the constantly shifting movements of light and color imbued on its craggy surfaces. Completing the axiological triad of low lying sculptures in this exhibition are a group of multi-scaled anthropomorphic floor works, “Animal Vegetable”, spreading out and over like a herd.

Hovering on opposing walls, two seemingly identical ceramic works both titled “Horizon”, feature bold swathes of blue glaze separating telluric registers from their empyrean skycapes. A wall mounted ceramic slab sculpture provides a recent example of an ongoing series that considers the poetic qualities of geological formations. The palette of its richly polychromatic surface is achieved through the application of epoxy mixed with pigment and arrived at in reference to a Pierre Bonnard self-portrait from 1889. Environmental factors implicit in the construction of the piece determine its final material state, and are physically rendered in the work, resulting in fissures, ruptures, and breaks along its textured expanse.

Liz Larner (b. 1960) received her BFA from the California Institute of the Arts in 1985. She lives and works in Los Angeles.