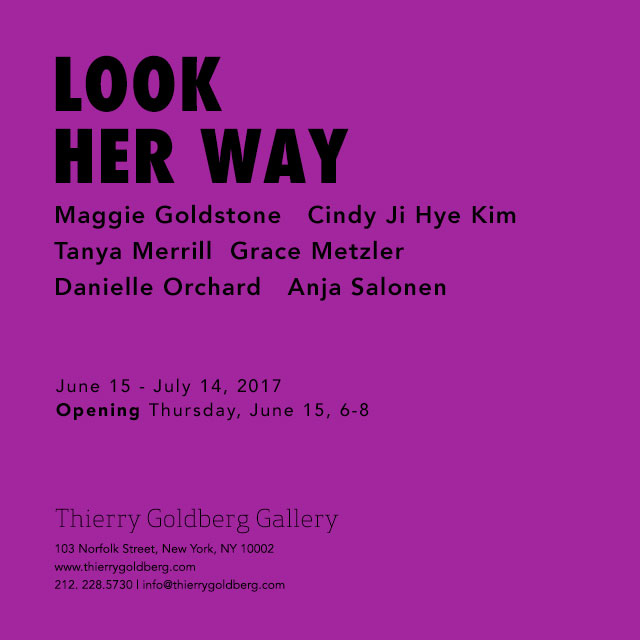 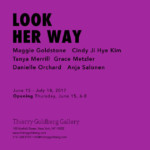 “Look Her Way” brings together a collection of painters whose work tackles themes of vulnerability and anxiety. Each artist leads the viewer in, whether with a familiar setting or recognizable image, only to almost immediately complicate first impressions. Charming scenes quickly surrender to apprehension, as dramatic tension and unease creep unabated into intimate moments. As precarious as modern life may seem, these works demonstrate that the outcome is uncertain – change is still possible. Each painting on view is an invitation to revisit one’s perspective of the world: see freshly, look her way.

The paintings of Anja Salonen feature female forms in strange, surreal scenes, where her distorted figures are often presented in a pleasing pastel palette that belies their uncanny rendering. Albeit in monochrome, Cindy Ji Hye Kim similarly creates unsettling tableaux staged in a flattened style reminiscent of turn-of-the-century cartoons. While the people and symbols in her compositions are immediately comprehensible, the course of her implied narratives are indeterminate, leaving viewers in a state of suspense as to just what might happen next.

Inspired by her suburban upbringing, Grace Metzler captures a Gothic element prevalent in contemporary rural America with her vignettes of regular, everyday people going about their lives, instilled with an undercurrent of loneliness and gloom that cuts against the rosiest optimism of our country’s aspirational ethos. Also setting her work outside the familiar urban milieu, Tanya Merrill challenges long-standing stereotypes of the striving Western settler by placing her male characters in frightening situations where they’ve suffered a complete loss of control.

Danielle Orchard abstracts figures and their domestic surroundings, often prompted by art historical references, into playfully complex shapes, textures, and swaths of color. The psychological spaces her works create echo an impulse, in the face of distressing circumstances, to alter and change something, even if it’s oneself for the worst. Recognizing but not succumbing to similar apprehensions, Maggie Goldstone presents paintings that accept the inevitability of loneliness, while pushing also to acknowledge its opposite in her series of warm embraces.

Cindy Ji Hye Kim (b. 1990, Anyang, South Korea) lives and works in New York. She received her B.F.A. from the Rhode Island School of Design in 2013, and her M.F.A. from the Yale University School of Art in 2016. She most recently had a solo show at Helena Anrather in New York, and her work has been featured in group presentations at Mulherin, Toronto; FJORD Gallery, Philadelphia; Field Projects, New York; Topless, Rockaway, NY; Rrrrose, Brooklyn; and the Abrons Art Center, New York. Kim has been awarded residencies from The Banff Centre, Banff, Alberta; Vermont Studio Center, Johnson, Vermont; Ox-Bow, Saugatuck, Michigan; Grin City Collective, Grinnell, Iowa; and Salem Art Works, Salem, New York.

Tanya Merrill (b. 1987, New York, NY) lives and works in Brooklyn, NY. She received her B.F.A. from Sarah Lawrence College in 2009 and is slated to receive an M.F.A. from Columbia University in 2018. Her work has been featured in various exhibitions in New York, NY; Beacon, NY; and Providence, RI.