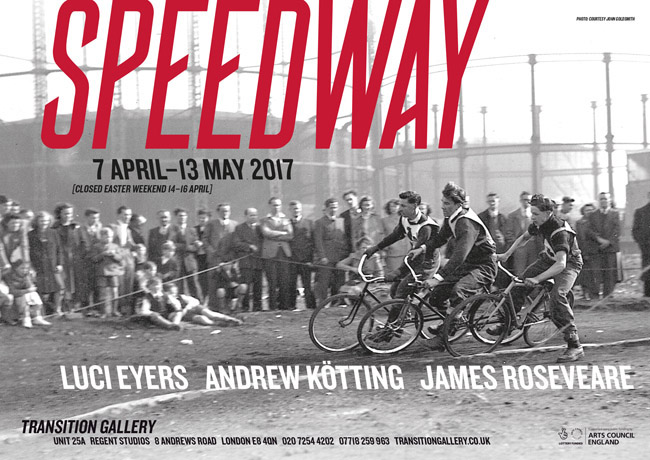 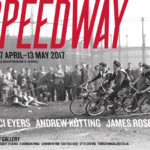 Regent Studios was designed for the Greater London Council in 1965 by Yorke, Rosenberg & Mardell to meet the needs of small-scale light industries in the East End. By the 1990s British manufacturing was on its uppers and the concrete framed block had become a desolate high rise. But fortunes change rapidly in the city and this well-considered building has in recent years carved out a contemporary place for itself as a creative hub occupied by architects, artists and designers.

But pre 1965 there is a hidden story of place. The plot where Regent Studios now stands, was post-war waste ground, the terraced houses that once occupied it bombed, flattened and slum-cleared. This unloved negative space was, however, in the eyes of the local youths, ripe with possibilities and here in the triangle formed by Andrews Road, Sheep Lane and Ada Street a track was stamped out, bikes were stripped down and cycle speedway began. In its heyday this make-do-and-mend track attracted audiences of up to several hundred to see local team the Warwick Lions compete in the East London Cycle Speedway League.

Inspired by this psychogeographic poetry of place, Transition Gallery, a Regent Studio resident since 2006, has commissioned a group of artists to make contemporary responses to long forgotten histories. “Speedway” the resulting exhibition is a circulatory meshing of a sense of community, historical layering, philosophical ruminations on time, archaeology, leisure and present day artistic ingenuity.

Luci Eyers’ animation relates to a neighbouring building with a history as varied as Regent Studios: Firmback Works, which is currently a car pound, but was earlier a Magdalene Home – a British Penitent Female Refuge aiming to ‘restore guilty females to the paths of virtue’. In 1875 it became an Industrial School for Girls. A report from 1896 explains ‘that although situated in a crowded neighbourhood it was exceptionally well off for light and air… The playground was ample and well fitted with swings.’ Eyers’ visually pared down animation is of a girl swinging, her simplicity quite different to Fragonard’s famously frilly “The Swing”. Political positions have become more polarized again and Eyers hopes to reflect this by evoking ‘different moods in the to-ing and fro-ing: one open and dynamic; and the other retreating and withdrawn.’

Filmmaker Andrew Kötting, in an ironic response, re-vists his film “Klipperty Klopp”, made 33 years ago, of a artist repeatedly and energetically running around a field in Gloucestershire pretending to be a horse. He describes the work as a ‘post-punk piece of pagan happening – part Benny Hill part Joseph Beuys’. In the re-make Kottin’s protagonist this time is a woman moving very slowly within the landscape. Married up shot for shot with the original super 8 footage, Kotting changing the ‘he’ to ‘she’ likes to see the work as an artefact dug up and represented in the gallery space.

James Roseveare is excavating the topography of the area around the gallery. The resulting minerals and debris will be reconfigured into a concrete sculptural object which plays with scale, form and materials and aims to merge everyday and complex meaning whilst evoking thoughts on physical terrain, memorials, excavation and artefacts. As the artist explains ‘the work encourages the viewer to reflect upon the quandary between things times-gone and things times-now.’

Alongside the physical works, writer in residence Helena Haimes will be writing about the ideas around the show. Her text “Must we make our own fun?” influenced by the speedway’s ad-hocness, will look at the nature of contemporary leisure in a rapidly changing city, and will be published in a new “Urban Ghosts” issue of “Garageland” magazine which will accompany and extend the themes of the exhibition.

“Speedway Talks” will further extend the exhibition with guest speakers to include John Goldsmith from the Warwick Lions, the cycle speedway team based at the Andrews Road track. The exhibition ends on Saturday 13 May with “Ghost Cinema”, a day of screenings, talks and performances by artists and academics, inspired by a long-gone neighbourhood cinema in Hackney.