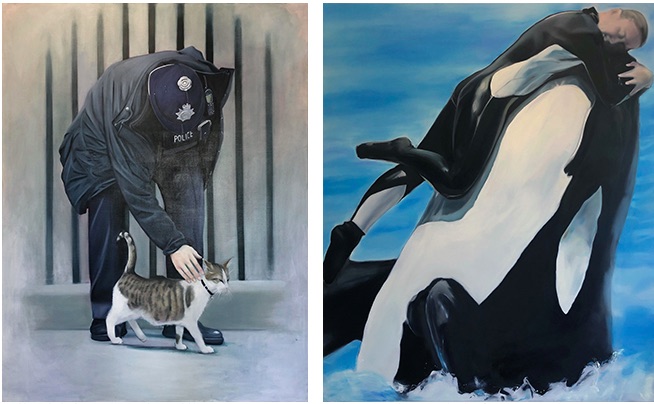 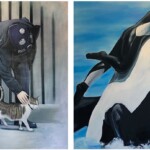 “When Species Meet” takes its title from Donna J Haraway’s book, which contemplates the interactions of humans with many kinds of creatures, especially domestic, by examining the philosophical, cultural, and biological aspects of animal-human encounters. New paintings by Lydia Blakeley and Lucy Evetts draw on Haraway’s investigations by exploring consumption, power and companionship in relationships between animals and humans in the public realm. They focus on two famous animal protagonists, Larry the cat and Tilikum the killer whale.

Blakeley‘s focus in on the Chief Mouser to the Cabinet Office, Larry, and his colleague at the Foreign Office, Palmerson. The cats who were both rescued strays from Battersea Dogs and Cats Home, are now permanent civil servants who reside in Downing Street. Anonymous sources have described Larry as having ‘a distinct lack of killer instinct’ with David Cameron adding that Larry is a ‘bit nervous’ around men (with the notable exception of Barack Obama), speculating that, this may be due to negative experiences in his past. In 2011, Larry was banned from the Prime Minister’s quarters at 10 Downing Street as his fur was ruining the Prime Minister’s suits. Although generally on good terms, the two cats have occasionally fought. On 1 August 2016, according to the political photographer Steve Beck, Larry had his ‘most brutal fight yet’ with Palmerston on the steps of Number 10, during which Larry lost his collar and Palmerston suffered from several deep scratches and a badly cut ear.

Evetts work examines the relationship between Dawn Brancheau and killer whale, Tilikum. Dawn was a senior trainer and poster girl for SeaWorld Orlando. Tilikum was a 5.4 tonne, 6.9 metre wild male killer whale born off Iceland in around 1981. He was captive at SeaWorld Orlando from 1992 until his death in 2017. In 2010 Dawn was killed by Tilikum following the performance ‘Dine with Shamu’, an incident that was witnessed by the audience seated in the stands and dining at the open-air restaurant at SeaWorld. This tragedy inspired the documentary “Blackfish” (Gabriela Cowperthwaite, 2013), which posits that Tilikum’s aggression, may be explained by his treatment at SeaWorld. After the documentary PETA called for SeaWorld to release all their animals from captivity. So far the only captive orca to have been returned to the wild is Keiko who featured in the Free Willy films, he was released in 2002 and died a year later. SeaWorld disputed the accuracy of “Blackfish”, calling it ‘propaganda’ and ’emotionally manipulative’, and complained that they lost over 15 million dollars due to the bad publicity (although they later added that this could have been due to ticket prices and bad weather).

Lucy Evetts was born in 1989 and lives and works in London. She makes paintings and installations with text and imagery and graduated from the Royal Academy Schools in 2018. Her work uses ontological metaphor as a way of exploring contradictions and opposing themes (such as nature and culture, history and myth and love and fear). She is interested in ideas of intimacy and modes of sharing which she then applies to create paradoxical narratives. Recent exhibitions include “Disir”, TM Lighting, London (2019); “Central House Assembly”, Sir John Cass School of Art, London (2017); “Closer To The Veg”, Fitzroy Park Allotments, curated by Galizine MacKenzie, London (2016); “All About My Mother”, The Keepers’ Studio, Royal Academy, London (2016).