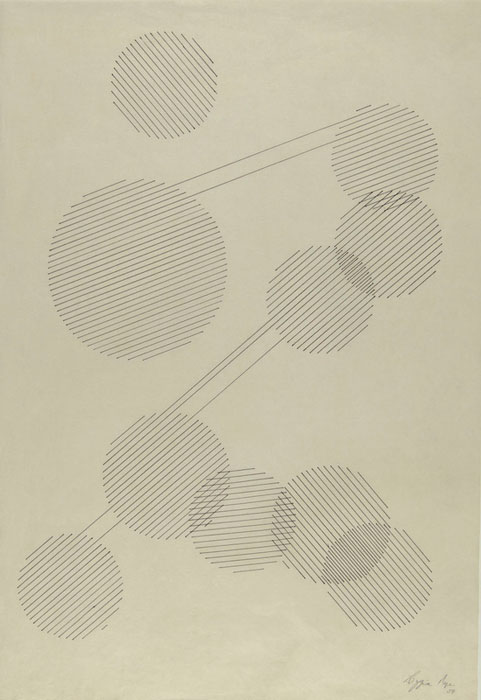 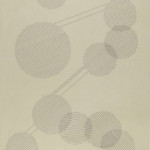 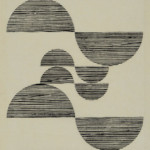 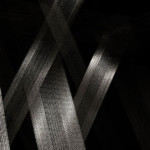 Hauser & Wirth is pleased to present an exhibition of work by Lygia Pape, the celebrated Brazilian artist central to the Neo-Concrete movement who pioneered a unique approach to abstraction. The show will focus on Pape’s early “Desenhos”, “Tecelares” and later, iconic “Ttéia” installations and marks the gallery’s first presentation of the artist since beginning work with “Projeto Lygia Pape” earlier this year.

Initially inspired by the formal geometric abstraction of Concrete art, which emerged in Brazil in the early 1950s, Pape started out by making geometric constructions. She later tired of the severity of this prescriptive art form and moved beyond its constraints, becoming a founding member of the Neo-Concrete movement dedicated to the inclusion of art into everyday life. Pape broke away from preconceived artistic categories, and from the 1960s onward sought to inject new expressive formulae into abstract art. The works in the exhibition span over 30 years, mapping the way in which Pape developed Concrete art’s geometric shapes into three-dimensional objects designed to transfigure in the presence of the viewer and be experienced sensorially.

In her early “Desenhos”, Pape’s geometric black shapes are reminiscent of musical staves – the lines, cuts, grids and ruptures are suggestive of compositions and variations, intersected by voids, which indicate moments of silence. For Pape, the positive marks and negative spaces were of equal importance in an interpretation of the work. They typify Brazilian geometric abstraction, characterised by an expressive quality and implying the engagement of the viewer in a reading of the work.

From early experimentations with printmaking, Pape developed her “Tecelares” principally between 1955 and 1959. These works reinterpreted the process of woodcut, casting aside the notion of the ‘multiple’ and creating individual works with an emphasis on the power of expression as opposed to premeditated modes of production. She created a harmony between the geometry of her forms on the paper and the natural grain of her wooden implements, exploiting the texture of the wood to explore the relationship between reason and nature; forging unity between artistic mechanism and the material’s own expressiveness. Guided by intuition alone, the relationship of her shapes is controlled by what Pape termed, ‘magnetisation’. ‘Magnetised space’ is the energy that emanates between forms and shapes when they are brought together in an artwork. When a person then encounters the work – either by physically moving around it or, by engaging with it emotionally – they add another dimension to this relationship, creating a new kind of ‘magnetism’. Pape’s mirroring, doubling and negative space interplay to activate the surfaces of her Tecelares. In these pioneering experimentations with woodcut, Pape divorced the medium from its associations with folk art, political propaganda and figuration.

Begun as interventions at Parque Lage in 1978 and 1979 for an experiment with her students, Pape’s “Ttéias” are now amongst her most celebrated works, and seen as most emblematic of her wider artistic practice. “Ttéias” are constructed by the geometric installation of silver or gold threads in a space, either from the floor to the ceiling or across the corner of a room. The groups of thread that course through space are also staggered, and some actually intersect others, literally weaving through the air. Other groups of threads, through the effect of lighting and tricks of perspective, simply appear to intersect: the installations blend the real and the imaginary, letting the viewer discover the work through movement and inspection. In this ethereal series, Pape succeeded in delineating the depth and volume of triangular space to explore spatial relationships with human presence at the centre. They plot volumes and achieve visually powerful and magical effects, charging the space with a sense of the indefinable, the immaterial. Included in the exhibition are the large-scale silver ‘Ttéia 1C’ (1976 / 2002) and ‘Ttéia n.7′ (1991).

‘Ttéia n.7′ comprises two pyramids covered with blue pigment that gently cascades to the floor. Presented in a dark space, two blue light bulbs hanging directly above are the only source of light. The form of ‘Ttéia n.7′ is atypical of the series, but the concept of weaving still underpins the work – when the blue light concentrated at the pyramids’ summit changes into dust of the same colour. In this “Ttéia” there are no threads or any other paths visible to the eye, just static shapes, matter and mutation in the speed of light. ‘Ttéia n.7′ exemplifies what Pape said about the series: ‘They are always in a permanent flux of transformation.’