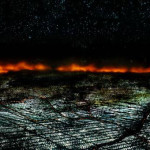 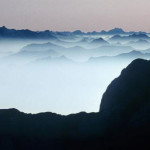 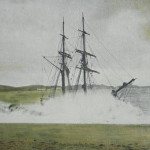 Parasol unit foundation for contemporary art is delighted to present “Magical Surfaces: The Uncanny in Contemporary Photography”, an exhibition that explores the uncanny as exemplified in the works of seven artists from two generations, all of whose work includes in different forms the use of photography as a medium. They are: Sonja Braas, David Claerbout, Elger Esser, Julie Monaco, Jörg Sasse, Stephen Shore and Joel Sternfeld.

As early as 1835, the German philosopher Friedrich Schelling wrote of “das Unheimliche”, the uncanny, as ‘everything that ought to have remained hidden and secret and has become visible’. Years later, Sigmund Freud elaborated on what Schelling and others had thought about this ‘peculiar quality’, but he also ‘felt impelled’ to investigate it in relation to aesthetics. In his influential essay ‘The “Uncanny”‘, 1919, Freud saw there was a common thread to everything that arouses our sense of the uncanny: it ‘is that class of terrifying which leads back to something long known to us, once very familiar’. Although individual responses are complex and subjective, what we experience as uncanny is that which gives us a feeling of unease when something seems both familiar and unfamiliar, when some quality effaces the distinction between the imagined and the real.

The “Magical Surfaces” title of this exhibition derives from the thoughts of Vilém Flusser who, in his “Towards a Philosophy of Photography”, 1983, wrote of photographic images as ‘significant surfaces’ and of ‘the magical nature of images’. We are always intrigued when an apparently straightforward image suddenly takes on an ambiguous, uncanny, quality as our mind grasps, as Ernst Jentsch wrote in 1906, its ‘intellectual uncertainty’.

The mastery each of the exhibiting artists has over their own process of manipulating the photographic image invites us to marvel at the many ways the uncanny can occur in photographic works. Essentially exploring time in his work, David Claerbout does indeed appear to do magic by bringing a pre-stardom Elvis Presley intimately back to life in three-dimensions by digitally reconstructing him from a 1950s black-and-white photograph. Julie Monaco‘s often hyper-real and dramatically turbulent scenes appear at first to be images of nature, but in fact are created entirely on her computer using fractal algorithmic software. An absence of presence is discernible in the apparently realistic images created by Jörg Sasse, one of the first artists to use computer technology as his brush and canvas. Both he and Elger Esser studied at the Kunstakademie Düsseldorf under Prof. Bernd Becher, who together with his wife Hilla is renowned for their remarkable photographs of industrial buildings. Esser, too, deals with time and memory in his serenely lit and composed land- and seascapes that seem at once to be both familiar and unfamiliar.

Sonja Braas works entirely in analogue, sometimes from ready-made sources, often by artificially creating landscapes or by building models which she then photographs, rather than directly photographing actual nature. Among other things, her work questions what is real and what is unreal in any image. In the 1970s, both Stephen Shore and Joel Sternfeld travelled independently across the USA, taking what are evocatively revealing photographs of the time and place. Using Kodachrome film and 35-mm cameras, they managed to capture an atmosphere that is almost palpably uncanny. Their work continues to inspire subsequent generations of artists to continue innovating with photography. As Sternfeld says: ‘Photography has always been capable of manipulation. […] any time you put a frame to the world, it’s an intervention […] photographs have always been authored.’

This exhibition is curated by Ziba Ardalan, Founder/Director of Parasol unit. It is accompanied by a comprehensive publication which includes essays by Ziba Ardalan, David Claerbout, and Marta Dahó who is an independent curator and teacher of History of Photography, based in Barcelona.