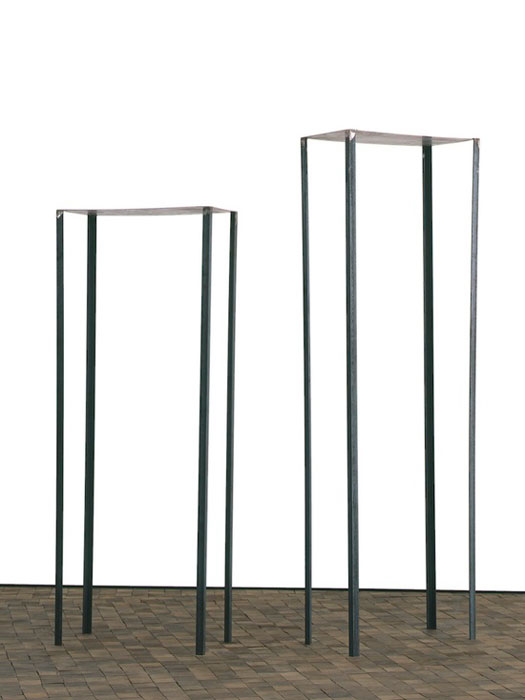 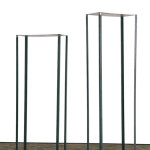 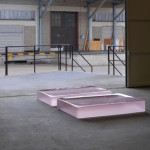 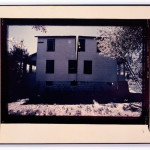 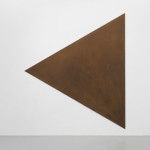 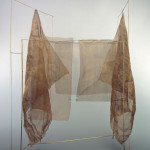 Hauser & Wirth London draws together the work of nine artists in ‘Maisons Fragiles’, a group exhibition exploring themes of fragility, vulnerability and protection as they manifest in a variety of guises. Spanning 60 years of artistic practice, the exhibition includes work by Louise Bourgeois, Alexander Calder, Isa Genzken, Robert Gober, Eva Hesse, Roni Horn, Gordon Matta-Clark, Fausto Melotti and Richard Serra. These artists share an innate sympathy towards architecture and a common preoccupation with materiality; each exploits the properties of their chosen materials – whether that be reflection, transparency or malleability – in pursuit of a mastery of form and space.

Louise Bourgeois and Roni Horn deal with notions of psychological fragility, as they explore fluctuating mental states, fluid concepts of identity, the subjectivity of memory and the precarious nature of human relationships. Bourgeois’s art inextricably entwines personal experience and artistic expression – much of the imagery and materials she used can be traced to her own life, particularly to the experience of childhood traumas and the fraught terrain of femininity. ‘Maisons Fragiles’ (1978), the work that lends its name to the title of this exhibition, confronts the deeply repressed issues that conditioned Bourgeois’s youth, and represents an exploration of the artist’s psyche. For Bourgeois, architecture functioned as a personification of the human condition. The perceived frailty of ‘Maisons Fragiles’ comments on the dialectical tension that exists between interior and exterior – the legs of the sculpture evoke the parameters of a house, while the empty interior speaks to the solitude of domestic life. Despite their fragile appearance, the structures are rendered in steel, endowing them with a strength and resilience that appears, at first glance, to be lacking. Although balanced precariously, the work’s frail appearance is only an illusion.

Grappling with a series of complex binaries that engage with an ongoing exploration of identity as a fleeting experience, Horn’s ‘Two Pink Tons’ (2008) plays with the disjunction between the physical properties of glass and the pictorial illusions of its presence. Slightly bowed like liquid under tension, the sculpture appears as two pools of water fixed in time and space. Themes of sameness and difference and mutability of form surge and resurface through this composed pair which invites comparison and contemplation. As the alchemical qualities of glass interact with movement, the experience between the object and viewer highlights changes in the sculpture’s texture and materials. The sides of these two sculptures are translucent and rough-edged from contact with the mould, whilst, by contrast, their flat surfaces appear highly reflective owing to being fire-polished. As the sculptures’ appearance shifts, the viewer realises their own existence as a state of mutability and becoming.

Robert Gober‘s uncanny explorations of architecture and objects call into question notions of ‘home’. He destabilises and subverts everyday scenes to uncover the disquieting, the disarming, the unnerving and the disconcerting. Gober takes objects – a bed, a crib, a door – which while anonymous are also universal, and plays with the tension between the disrupted forms and the strong emotional and physical connotations we attach to them. In transforming these objects, Gober transforms a viewer’s emotional and physical reality; the common made uncommon. ‘Untitled (Bent Door)’ (1988) takes a door as its central motif, which appears to be folding in on itself. It is installed broken to triangulate with the floor, and the viewer encounters it as an obstacle as they traverse around it and through the gallery space. Installing the work thus, Gober creates a sense of movement and of change, as, depending on one’s outlook, the door is either precariously propped while collapsing down on itself or about to rise back up to its vertical and functional state. As in all Gober’s work, the manner of construction of the door is a central part of its mystery. Rather than take an actual door and modify it, here, the artist has crafted a new door as wooden sculpture.

Gordon Matta-Clark, who trained originally as an architect, focused on the dehuminisation of the modern world, and developed a personal idiom that combined elements of Minimalism with architecture. Using abandoned buildings for his medium and wielding a chainsaw as his instrument, he cut into the structures, creating unexpected apertures and incisions. He is best known for his ‘building cuts’, which have been seen as an outright rejection of the architectural profession. His practice introduced new and radical modes of physically exploring and subverting architecture, and some of his well-known projects involved laboriously cutting holes into floors of abandoned buildings or, as with ‘Splitting’ (1974), his iconic rearrangement of a suburban house in New Jersey. The light from the incision invaded the interior and united the rooms with a swath of brilliance.

The delicate papier-mâché works by Eva Hesse take the form of geometric cubes, projecting a sense of containment and underscoring her interest in the psychological experience of domestic space. In ‘Inside I’, she covers an open wooden box with painted grey papier-mache. Deep in the bottom of this cube sits a snarly tangle of painted cords, wire and twine, a mass of snakelike forms that are statically fixed but anticipate hissing reverberations. ‘Inside II’ is similarly composed from a thick-walled open box that holds two amorphous weights wrapped in paper, bound with cord, and again painted grey. Throughout her sculptural work, Hesse responded to the rigidity of Minimalism by tangling, binding, complicating and enclosing space in order to underscore the expressive possibilities inherent in abstract sculpture. Provisional and raw, through rough edges, chance groupings, and the clash of smooth exteriors and irregular interiors, Hesse was able to register the expressive barometers of the body and the mind.

Isa Genzken and Richard Serra here explore spatial relationships between object, environment and viewer. Executed in 1975, Serra’s monumental ‘Untitled’ reflects the artist’s preoccupation with sculpture as a means to create and organise space. Crafted from corten steel, its equilateral proportions encapsulate the artist’s minimalist practice. A flat wall sculpture, ‘Untitled’ reinterprets the relationship between an artwork and its environment – making both distinct to the spectator. Serra uses material to investigate, divide and organise space in both two and three dimensions. The corten steel, designed to acquire a dark, even patina of rust over time, adds a fourth dimension to the work – time. ‘Untitled’ takes on an active quality, distinct from the immutable geometry of Minimalism. It alters space and is altered by time, a visual manifestation of Serra’s interest in the collision of matter and space.

Genzken has been inspired by two grand themes: modernity and urban architecture. Ranging from largescale sculptures that draw on Constructivist and Minimalist aesthetics, to rougher, more overtly architectural concrete works that conjure ruins, to paintings, photographs, and found-object installations that have redefined assemblage for a new era, Genzken’s body of work represents both a rare artistic freedom and a disciplined, almost obsessive sensitivity toward the relationship of individuals to their sculptural surroundings. Her concrete forms rest on special metal tables in which sculpture and display achieve a visual unity. Her concrete works are like Brutalist architectural models, with rough-hewn shells of empty buildings and various wall configurations.

The works of Alexander Calder and Fausto Melotti are exercises in articulating space. Their sculptures dispel sensations of ambiguity and fear – fragility is displayed not as a weakness, but instead represented as dexterity and serenity. Melotti’s ‘I lavandai’ (1969) encapsulates the artist’s lyrical approach to sculpture, drawing on the lightness and tactility of the delicate materials from which it is crafted to create a work poised between geometry and representation, abstraction and narrative. It eschews the noise of welding or firing, carving or cutting, for an art whose power rests in the liminal, the border between seen and unseen, the physical and the ephemeral. Dematerialised to the point of weightlessness, the artist’s work stands in space like an aerial drawing, incorporating space and air into its essence.

In a feat of equilibrium archetypal of Calder’s groundbreaking sculptural innovation, the floating network of interconnected elements that define the composition of ‘Untitled’ (1974) is delicately and perfectly balanced, suspended in mid-air. The constellation of forms that Calder has brought together in ‘Untitled’ move in asymmetrical symphony. The shapes the artists chose to use here are abstract, though they reference both organic and man-made shapes – including leaves, blades of paddles, fins, tails, and sails. Calder’s embrace and celebration of natural forces was arguably as integral to his practice as his favoured media of sheet metal and wire. Indeed, encouraged to move organically with the subtlest breath of air, this mobile epitomises the captivating dichotomy of the material and the natural, of stasis and mobility, which is so central to Calder’s practice.