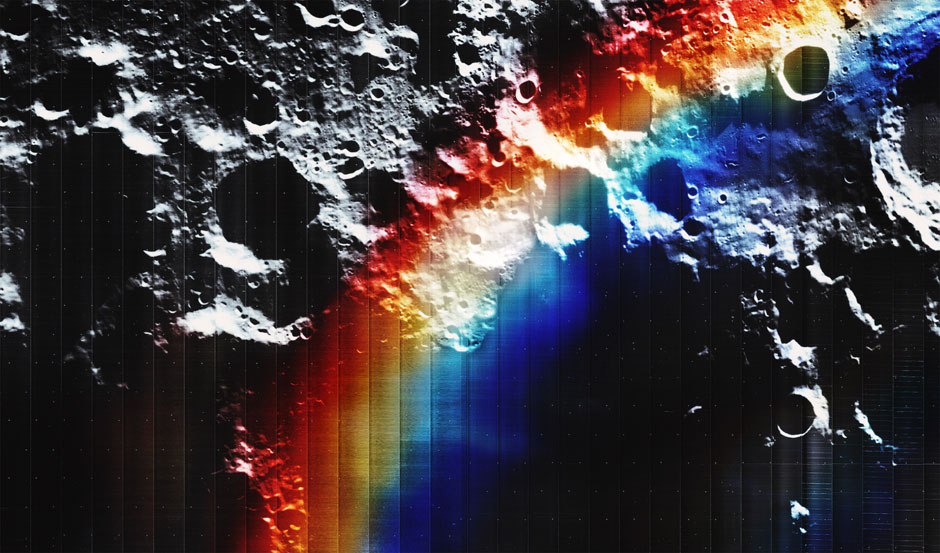 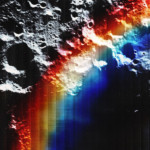 Marco Brambilla continues his ongoing investigation of the divide between analog and digital as it relates to exploration – specifically space travel. These considerations are shown in his three-minute time-lapse video “Sea of Tranquility” (2006), “Atlantis (OV-104)” (2012), and finally “Apollo XVIII” (2015), a virtual countdown to an imagined mission to the moon broadcasted on fifty-four screens on Times Square, turning the site of the world-famous New Year’s Eve countdown into a virtual launch pad.

Orbiter I / Orbiter II (2016)
The latest elements in this line of exploration are the video sculptures “Orbiter I” and “Orbiter II” (2016). Consisting of powder-coated aluminum enclosures housing ultra-high definition video screens, the choreography played out is based on the original transmissions of Lunar Orbiter missions between 1966 and 1967. The missions took photographs of the moon and processed them on film while in lunar orbit, via a chemical process similar to Polaroids. The developed images were scanned, sent back to Earth, and stored as analog data, each image taking one day to reach earth. A generation later in 2008, the Lunar Orbiter Image Recovery Project (LOIRP) re-processed the original mission analog data tapes to produce dramatically enhanced versions of these iconic and historic images.

Working with NASA and using current digital technology, it became possible for Brambilla to digitize these de-archived photos into continuous moving images.
In this way, the artist’s intervention duplicates the trajectory of the original orbiters as a virtual flyover. The effect is as though we were to receive moving flyover images in real time from the lunar orbit. In effect, the temporal plane of spectator is transported back to the 1960’s. But at that time, such a sight was technologically impossible, and therefore the 1960’s we observe in the flyover is one of science fiction fantasy.

The slow, almost imperceptible movement and changes in the simulation video “transmissions” recall the rhythm of the original transmissions as they beamed back to earth. The images appear in such a way that the “Orbiter” sculptures seem to be receiving the data themselves in real time. The startling juxtapositions yield an arresting geometry of cubist simultaneity, that when displayed through the sculptural grid, allude to the origin of the images as discrete photos and to their mapping role as functional surveys. This melding of instances and rhythm – and the erasure of time barriers – mirrors the current digital trends in erasure of geographical and temporal distance, and the underlying discordances between electronic space and physical space.

This complex of tensions suggests that what is lost of these images in transmission is itself a medium of their reconfiguration for aesthetic aims. They remind us that the meaning of a work of art can derive as much from its process as from its final material realization, and that no technology mitigates the moon’s capacity to mirror our aspirations to transcendence.

Transmission – Frank Borman (Apollo VIII)
A square liquid crystal screen is housed inside a human-sized steel column, “Transmission – Frank Borman (Apollo VIII)” features a rare video transmission of Commander Borman (of the first successful moon mission), accessed by Brambilla at NASA headquarters in Cape Canaveral. The blue-tinged imagery that flickers in and out of focus emphasizes the original material’s vintage analog quality. The transmission loops endlessly, in effect trapping the astronaut in the pre-launch moment.

Ignition (Apollo XIII)
A circular projection depicts an astounding view from underneath the thrusters of a Saturn V rocket. This fiery footage was shot in extreme slow motion of the last manned mission to ever make it to the moon (also sourced from NASA’s archives) and casts a warm glow over the gallery space.

This acts as a dramatic counterpoint to the eerie high contrast black-and-white moonscapes of the two Orbiter pieces, derived from photography, whose purpose was finding a viable landing site for a subsequent moon mission.

Reconnaissance (Apollo VIII)
This large scale photographic work depicts the lunar surface as a composite of all the images produced by the Orbiter missions. A chromatic rainbow is digitally superimposed over the de-archived analogue material.

Brambilla’s latest works describe the space program’s shift from manned missions to surrogate modes of survey and investigation. Mixing fading memories of the golden age of space travel with fresh optimism inspired by the promises of today’s technology, the artist leaves the viewer to decide the value of contemporary space exploration.