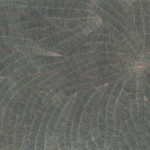 Margaret Loy Pula is a painter who belongs to the Anmatyerre tribe of Utopia in Central Australia. Winner of the 2017 prestigious Arthur Guy Memorial Prize, Pula is one of the most celebrated Aboriginal artists today.

“Dreaming” is an Aboriginal philosophy based on the interconnectedness of spirit, land, all people and things. The Anmatyerre preserve imperative knowledge, cultural values and traditions through their Dreaming stories, passed down the generations in art, song and dance. Continuing this ancient legacy, Pula’s web-like reductivist paintings are based on the microcosm of her culture, her totem and her father’s Dreaming – “Anatye” or bush potato.

More than just a source of sustenance, the bush potato holds a deep spiritual significance to Pula’s tribe. The Anatye paintings therefore reflect a lucid image linking the material and the spiritual. Pula employs a reduced color palette applied with a rhythmic dabbing action while lying on the ground with her canvas. By her gradual working from the center towards the corners, grids of irregular geometric shapes emerge. The resulting paintings are reminiscent of the early minimal compositions of Western abstract art but with Pula there is a poignant sense of delicacy and fragility that is countered by strength of color.

The world her paintings evoke is familiar yet intensely personal. It seems as though one is looking down onto an expansive landscape, reflecting the serpentine course of bush potato vines hidden in the red ochre earth. Or against black, the work evokes the infinitude of stars within the night sky of Utopia. They even suggest spider webs gleaming with the morning dew.

Pula hails from an incredibly distinguished artistic family. She is the daughter of well-known Aboriginal artist Kathleen Petyarre and the mother of Abie Loy Kemarre. Born in 1957, Pula came later than most to art – she has been painting for just ten years – and she is the first Indigenous artist to win the prestigious Waterhouse Natural History Art Prize in South Australia.

Other notable prizes include the Paddington Art Prize (Sydney), the Muswellbrook Art Prize (2013), Redland Art Prize (2014) and the Grace Cossington Smith Art Prize (2014). For the 2017 Arthur Guy Memorial Prize, the judges, Dr David Hansen (Associate Professor of the Centre for Art History and Art Theory at the ANU School of Art and Design) and Hannah Matthews (Senior Curator at the Monash University Museum of Art) noted that, ‘with its demonstrable connection to country, the quietly mesmerizing (Pula’s) work could also be interpreted through the Western tradition of minimalist abstraction’.

In the last two years Pula has been in major exhibitions in New York, Brisbane, Singapore, Miami, New York and Mexico City. Her work is found in important public and private collections in Australia, Asia, US and Europe such as the South Australian Museum. She is represented by Mitchell Fine Art, Brisbane and Marc Straus, New York.