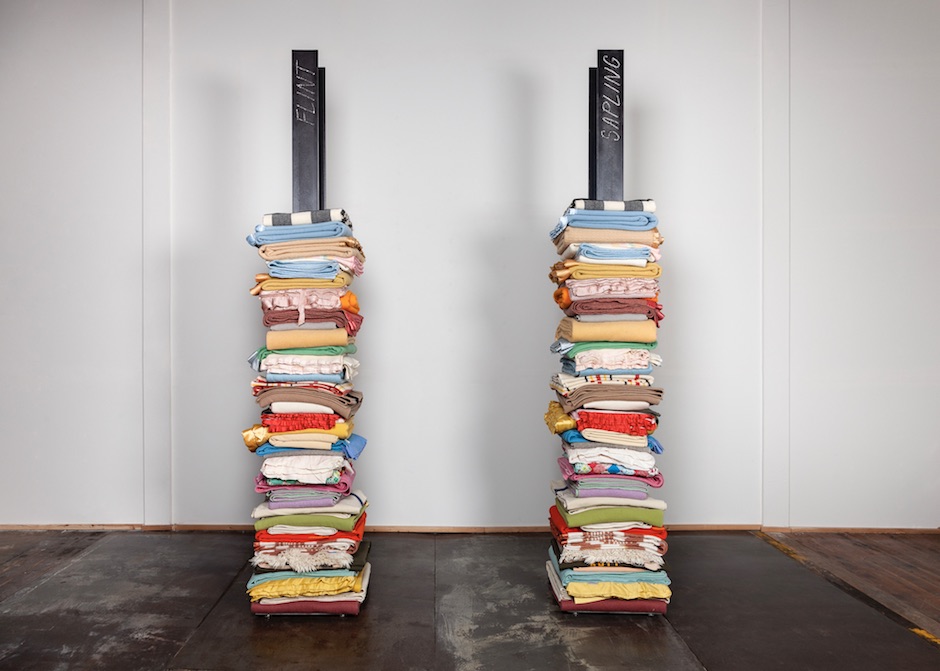 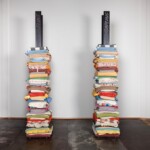 Marie Watt (b. 1967, Seattle) is a citizen of the Seneca Nation, the largest of six Nations in the Iroquois Confederacy. Mythologies and history from her Native American heritage inform her process and are seamlessly interwoven in her art with commentary on international politics and pop culture references.

Her layered points of influence are often reflected in her use of text elements featuring language drawn from Indigenous knowledge and Iroquois proto-feminism, the matriarchal structures of certain Native American tribes, the rise of social activism throughout the 20th century, and the anti-war and anti-hate content of 1960s and 1970s music – such as the Marvin Gaye song, “What’s Going On.” Messages of both longing and hope from the past that still resonate today.

Some works in this exhibition, for the first time allude to the writing of Joy Harjo, the 23rd US Poet Laureate, and the first Native American named to the role.

In this new body of artworks by Watt there is a recurring use of the word “Skywoman,” who is a central figure in Iroquois origin story. The creation story relates that a fallen sacred tree tore a hole in the clouds in the Sky World that she fell through. Birds, and then animals help Sky Woman settle on what becomes Turtle Island. In acknowledgement for the way animals helped Sky Woman, the Iroquois consider animals their first teachers. This historic relationship is also acknowledged in the clan system; Watt is from the Turtle clan. Watt extends perceptions often associated with close family members and contemplates a greater connectedness between larger populations including animals and the environment.

Her use of textiles is a central tenet of her work. Whether a shirt or a blanket, these are items that protect us against cold and external dangers. In “Companion Species (Guardian/Auntie)” she uses reclaimed army blankets, which are used to camouflage and conceal their human counterparts in nature. These earthen green blankets embody landscapes while holding, protecting, and shielding and underline the reinforcing link between the object and the narrative. For over 15 years Watt has been creating hand sewn tapestries, often realized through collaboration with sewing circles around North America. For Watt the use of secondhand blankets is essential; they come imbued with life, embedded with their own history and stories.

“Skyscraper/Skywalker (Twins)” are composed of matching twin blankets that Marie has been scavenging for 10 years. Her interest in these stems from the tradition of Indigenous communities giving blankets away to honor people for bearing witness to important life events. With these twin columns Marie is illuminating the history of Indigenous presence in New York. Most of New York’s skyscrapers were built by Mohawk/Iroquois ironworkers, known as Skywalkers. The word “Skywalker” has captured Marie’s imagination as a word that refers to this space that seems otherworldly, mythic, and magical while serving as a conduit for the past into the present. Sapling and Flint are the twin grandsons of Skywoman and are creator/ destroyer figures essential to creation of the physical world as we know it.

On December first Loro Piana, the renowned international clothier, will feature a new installation by Marie Watt at a boutique opening across from the Whitney. She has also designed a limited-edition blanket which includes embroidered language gathered with Loro Piana from around the world.

Watt is currently included in several museums: the Whitney exhibit “Making Knowing: Craft in Art, 1950-2019” with her piece “Skywalker/Skyscraper (Axis Mundi)”, 2012; Yale University Art Gallery in “Place, Nations, Generations, Beings: 200 Years of Indigenous North American Art”; Crystal Bridges Art Museum in “Companion Species”; the Heard Museum in “Larger than Memory: Contemporary Art from Indigenous North America”; the Tang Teaching Museum in “Never Done: 100 Years of Women in Politics and Beyond”. Upcoming May 2021, Marie is participating in a major two person exhibition alongside Cannupa Hanska titled “Each/Other” at the Denver Art Museum. Her work is the focus of a 2022 printmaking retrospective at the University of San Diego.