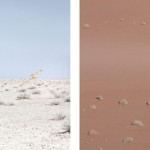 Namibia is a country of deserts with barren stretches that yield only to subtle variations of the same aridness. Robert Mann Gallery is pleased to invite you to step into this unforgiving environment with the newest work from Maroesjka Lavigne: “Land of Nothingness”. From this desolation, Lavigne composes a visual symphony. The animals and the very landscape in which she finds herself appear to respond to her camera lens. The resulting images are harmonious compositions that showcase the natural rhythm of the desert with wildlife sightings and staggering landscapes as highlights to the monotony.

Though at times the sameness can be hard to navigate, “Land of Nothingness” uncovers the unexpected beauty often hidden in plain sight on the scorched earth of the Namib. Lavigne reveals the carefully balanced order that comes with life on an unrelenting desert. “Four Giraffes” shows the cadence in which all of nature moves. These giants tower over every other animal on Earth but are dwarfed by the majestic wildness of the desert, becoming a part of the pattern of the land. Evidence of human encroachment on the natural beauty of Namibia is few and far between, this is a place at the mercy of the rule of the elements.

“Gaze” shows just how minute human influence is when their presence can be nearly mistaken for parched vegetation. Lavigne has ventured into a world devoid of the consumer culture and instant gratification to which we have grown accustomed. In this is a place where hours of driving pass before you see anything other than sand dunes you must confront your own insignificance.

“Land of Nothingness” is Maroesjka Lavigne’s second exhibition with the gallery the first, “Ísland”, was shown in 2014. Lavigne’s work has been shown internationally in Japan, Italy, and Belgium. In late 2015 Lavigne was awarded the Harry Pennings Award with her series, “Not Seeing is a Flower”. She has also won a LensCulture New & Emerging Photographers Grand Prize. The artist’s work has been featured in The New York Times Style Magazine, Aesthetica Magazine, and the FOAM Magazine Talent issue. Lavigne lives and works in Ghent, Belgium, and graduated with a Masters in Photography from Ghent University in 2012.