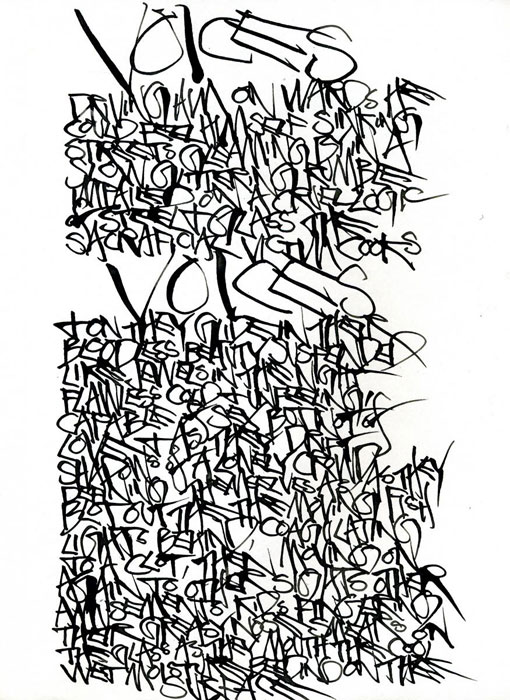 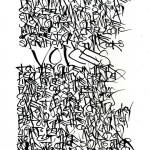 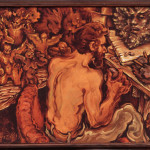 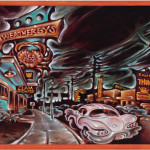 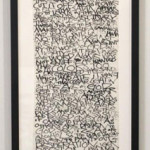 P.P.O.W is pleased to announce “Voices”, Martin Wong’s fourth solo exhibition at the gallery. The exhibition runs concurrently with his retrospective “Human Instamatic” now on view at The Bronx Museum of the Arts until February 14th. “Voices” concentrates on Wong’s continuous association with language as the source of his artistic practice – echoed in the forms of poetry nurtured by his affiliation with the Nuyorican poets and fueled by Kufic manuscripts, Sanskrit calligraphy, sign language, astronomical constellations and graffiti. The exhibition includes more than 100 works concentrating on poetry scrolls and including paintings, drawings, ceramics, dog tags, illustrations, and publications dated from 1968 to 1999.

Martin Wong’s relationship to writing began at a young age and he self-identified as an aesthete with important literary figures from different generations. Narrating the world of melancholia through his poetry scrolls and self-published books, he built his own language to portray his personal life as a flâneur in California. Wong’s serial process of writing and re-writing created and expanded a linguistic space that he would later introduce into the surface of his paintings and ceramics. After moving to New York City in 1978, Wong’s fascination with language enabled him to build his own vernacular inspired by the overheard vocabularies spoken by gang members, newspaper headlines read by passengers on the trains, bi-lingual cards (English on one side, American Sign Language on the other side) used by the deaf to communicate with others in everyday life and the coded script of Graffiti writers. This exhibition intends to bring to light the overlooked status of Wong’s written work in his complete oeuvre by exploring his inspirations in psychedelia, love, friendship, sexuality and death, and reflects on performing his desire to subjected masculinities (convicts) and anonymous heroes (firemen) in everyday life.

Wong was born in 1946 in Portland, Oregon and was raised in San Francisco, California. He spent 1966 and 1967 studying architecture at University of California, Berkeley before enrolling at Humboldt State University in Eureka, California the following year to study ceramics. After his studies ended, Wong traveled to Herat in Afghanistan to continue his ceramic studies by taking Mosque mosaic workshops. When he returned, he worked as a set designer for the Bay Area-based queer performance troupes “The Cockettes” and “The Angels of Light” from 1971 to 1973. Wong dubbed himself the “Human Instamatic” in 1975, quickly sketching portraits and selling them for a few dollars in Eureka, before he decided to become a painter and moved to New York City in 1978.

Wong died in San Francisco from an AIDS related illness in 1999. His work can be found in museum collections including: The Metropolitan Museum of Art, The Museum of Modern Art, The Bronx Museum of the Arts, de Young Museum, The Art Institute of Chicago, Whitney Museum of American Art, San Francisco Museum of Modern Art and The Cleveland Museum of Art. He had a one person show “Sweet Oblivion” at the New Museum in 1998. In 2013 the exhibition “City as Canvas: New York City Graffiti” from the Martin Wong Collection, organized by Carlo McCormick and Sean Corcoran, opened at the Museum of the City of New York.