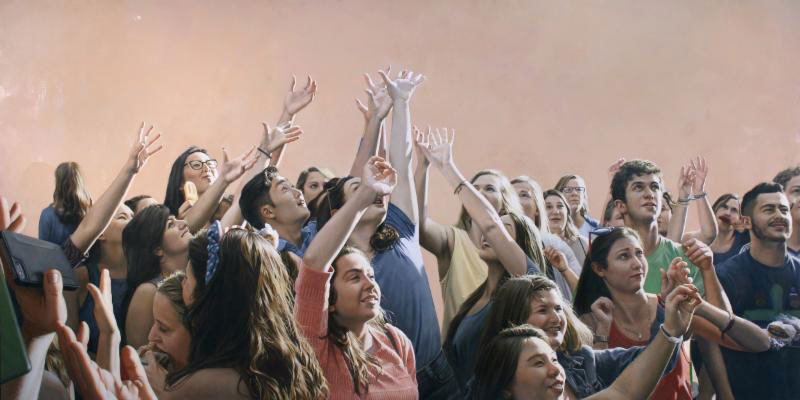 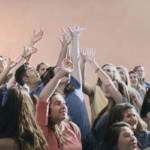 “Public Views,” addresses themes of group identity and the contrast between the public and private self. The series draws inspiration from large collections of people from a variety of settings – exhibitions, political rallies, festivals, sporting events, protests, etc. and examines the subject of crowds in open spaces, and the ways in which we present ourselves when we choose to take part in a communal experience. Henderson is interested in the intersection of how individuals and groups attempt to construct or live up to idealized personae or experiences, and in how those efforts either conform to, or break from, expectations.

Henderson presents the subjects of her compositions out of context, with minimal visual cues regarding location. By exploring and exploiting notions of diaspora as well as the purely visual beauty that the artist finds in images of mass gatherings, Henderson raises questions about the assumptions we make in interpreting group behaviors. The subjects themselves are shown in unguarded moments of vulnerability, reflection or preoccupation and exist in a state of suspension between individual and collective identity.

This vision of suspended reality is inspired by Henderson’s personal and family experiences and drawn from photos that she has taken, images shared with her by friends, as well as the broader social-media phenomena of sharing one’s experiences created by anonymous and out-of-context photo-based dialogues that are broadcast across the world-wide web. It is this democratization of digital photography that has made producing an image easy and nearly costless, creating a culture of visual documentation in which individual moments are quickly lost or forgotten. The deadpan casualness of snapshots, with their awkward details and generic or haphazard compositions, is part of what Henderson finds so compelling about their vernacular visual language. Painting, meanwhile, is a completely different sort of medium – one that is based on memory and repetition, focus and intentionality. An image made by hand carries a special kind of weight at a time when digital picture-making is so abundant; by its very nature, painting is slower and more deliberate, remaining an object for slow contemplation in a world saturated with rapidity and images made for screens.

“Public Views,” exemplifies the central concern in Henderson’s practice; the juxtaposition between today’s exceedingly ephemeral visual culture and the more permanent archetypal aspirations of the figurative artistic tradition. Henderson states, “I am inspired by the visual urgency and freshness of snapshots, and by the distancing qualities of the iPhone lens. My paintings are not straight photorealist renderings, however: they build on the language of smartphone photography, but also incorporate layered surfaces that are founded on anatomical study, memory and direct observation. In this sense, my paintings are very much hybrids: I pare down, deconstruct and combine sources, creating scenes and figures that frequently include elements of self-portraiture and renderings of family and friends. In marrying the vocabulary of digital snapshot photography with the painstaking techniques of the figurative tradition, I hope to make paintings of the everyday that engage with contemporary culture while still maintaining an informed connection to their art-historical precedents.”

Mary Henderson received her BA in Fine Arts from Amherst College in Amherst, MA (1995), and her MFA in Painting from the University of Pennsylvania in Philadelphia, PA (2001). Her work was included in “Mirror Mirror: Contemporary Portraits and the Fugitive Self,” at The Museum of Art, Brigham Young University, Provo, UT, “As Others See Us” at the Brattleboro Museum, Brattleboro, VT, “The Future is Now,” at the Delaware Center for Contemporary Art, Wilmington, DE and has participated in numerous exhibitions in New York, Chicago, Miami and other cities. Mary Henderson lives and works in Philadelphia, PA and has been represented by Lyons Wier Gallery since 2006.