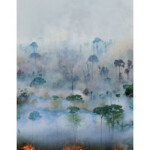 In her fifth solo show at Robert Mann Gallery, Mary Mattingly exhibits a series of photographs that are driven by an urgency to document the speed of climate change and habitat fragmentation through images that appear as fluid timelines. These photographs interpret changes in land over geologic time (based on fossil records) in order to describe a place through its deep history. They also speculate on near futures as witness to an exponential speeding-up of geologic time due to human-induced climate change.

“Pipelines and Permafrost” was also driven by hope: hope that arises when people work together to combat destruction of a land base. It honors water, land, and forest protectors around the world who have fought for the rights of nature against increased industrialization. Many are Indigenous Peoples (or are in alliance) fighting to protect their nations and homelands against exploitation, many have struggled against extractive mining operations, logging corporations, and industrial agriculture* to protect primary forests, conserve animal habitats, plant species, and water. These photographs are particularly potent today because of the current administration’s relaxation of many environmental protections put in place by previous administrations, including the Clean Air Act, the Clean Water Act.

“I needed photography to do something that was beyond documenting, and specifically documenting widespread traumas through visible scars left on land. So I started to construct these collages that fluidly evoke places from deep time through to a speculative future. To me, they honor the work of everyone involved in fighting for habitats, and for humanity by proxy.” (Mary Mattingly)

Mattingly is a photographer and sculptor with a focus on Environmental Art. Most recently, Mattingly was announced as the Brooklyn Public Library’s Artist in Residence for 2020. Some of her major projects include the founding Swale, a landscape on a barge in New York City; participating in the Second ICP Triennial of Photography and Video Ecotopia show; the “Waterpod” Project in the New York City Mayor’s Office; and “Wearable Homes” at the Anchorage Museum, examining the intersection of clothing and sustainability. She participated in MoMA PS1’s “Expo 1” in collaboration with Triple Canopy Magazine in 2013, received a Knight Foundation Grant for her “WetLand” project that opened in 2014 on the Delaware River in Philadelphia, and in 2015, she completed a two-part sculpture “Pull” for the International Havana Biennial with the Museo Nacional de Bellas Artes de la Habana and the Bronx Museum of the Arts. Her first “Art 21: New York Close Up” documentary video was released in 2013. Mattingly’s work has been exhibited at the International Center of Photography, the Seoul Art Center, the Brooklyn Museum, the New York Public Library, deCordova Museum and Sculpture Park, and the Palais de Tokyo. Her writings were included in Nature, edited by Jeffrey Kastner in the Whitechapel Documents of Contemporary Art series.

*50% of proceeds from this exhibit will be donated to the Grassroots Global Justice Alliance.

Gallery hours are by appointment