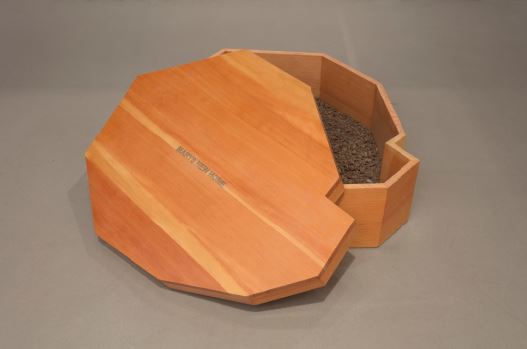 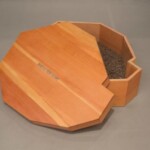 Roman Cochet‘s work depicts scenes in which humanity appears to have vanished. A sense of desolation is palpable as untamed vegetation and overturned furniture fill in the gaps of human civilization. Also on display are “half-plant, half-robot” sculptures cast in resin and composed of a banal array of objects, from plastic vegetation to computer cables.

Michael Buthe reveals a universe that is exuberant and dreamlike in his paintings and installations. In the 1970s, this was expressed in the form of room-sized environments. The paintings and objects which follow in the 1980s and early 1990s consist of intensely colored assemblages that seem on the verge of self-combustion.

A central facet of Willie Cole‘s work since the 1980s has been his use and transformation of found objects, from irons to bicycle parts to women’s shoes. Of particular note is “Woman in Heels 2019”, a large-scale bronze inspired by Senufo sculpture.

The paintings of Diango Hernández often address failures of communication; images dissolve and messages are unsent. In “If yesterday 2011”, Hernandez has painted over Cuban stamps. The abstracted stamps, reduced to their outlines and with their imagery obscured, interrupt the painting’s undulating waves of color and light.

Robert Kinmont grew up in the desert near Bishop, CA and has lived most of his adult life in northern California. These rural environments have provided the practical and conceptual foundation for his work, exemplified by his recurrent use of natural materials such as wood and dirt. “Mary’s New Home 2017”, a testament to the artist’s craft and woodworking skill, is named after Kinmont’s deceased dog, Mary.

Stefan Kürten‘s densely imaged paintings examine the visual language of 20th century architecture. In “Running to Stand Still 2014”, Kürten has superimposed twelve different architectural views over a golden thicket. The tension between the twisting, interlocked branches and the houses themselves reveals the artifice at the heart of these domestic spaces.

Jorge Macchi‘s paintings alter scale and context to depart from the ordinary. Macchi’s paintings have been termed “anti-iconic” by curator and art historian Cuauhtémoc Medina, in that they seek to escape an overcoded, predictable interpretation of the medium and move toward an understanding of painting tied to individual experience and ambiguity.

Rita McBride‘s “Glass Conduits 1999” are a set of 16 one-meter modular tubes hand blown in Murano glass. The modular is installed vertically in the gallery with a construction grade system of ceiling/wall conduit brackets. These works are at the core of McBride’s 30 year investigation of service systems that dominate our modern built world. The use of customized Lalique like frosted Murano glass highlights the important role of the service conduit that brings daily electricity and water.