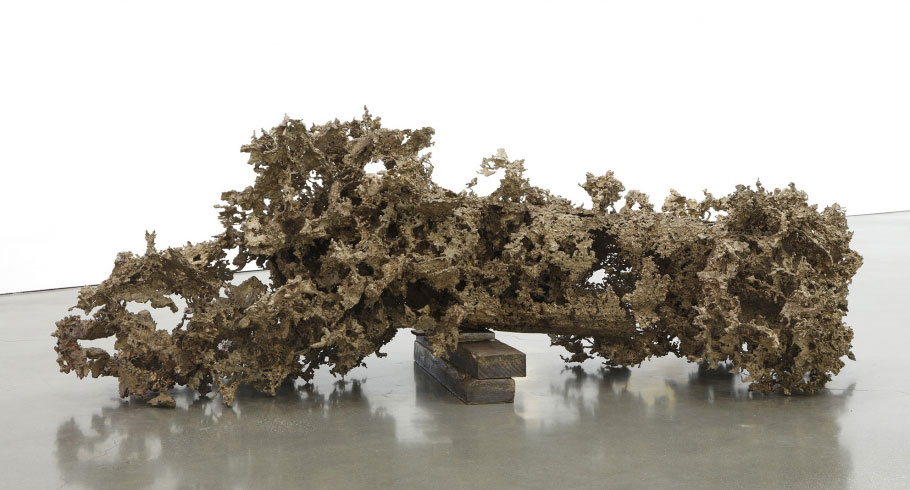 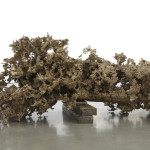 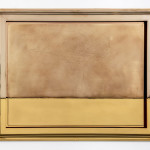 Regen Projects is pleased to present “Water Castings: Fourteen Pieces”, an exhibition of new work by New York-based artist Matthew Barney. Barney had his first solo gallery show at Regen Projects in 1991 and this marks the artist’s fifth one-person exhibition at the gallery.

The “Water Castings” are a group of cast bronze sculptures that evoke the mythological and material narratives of “River of Fundament” (2014), Barney’s six hour operatic film. They continue Barney’s recent shift away from his signature materials of thermal plastic and petroleum toward metals used both in early forms of sculpture-making and in automobile manufacture. This fourteen-part series draws on a narrative central to “River of Fundament”: the Egyptian myth of Osiris, whose body was cut into fourteen pieces.

Barney made the “Water Castings” using a unique process he developed over the past year, in which molten bronze is poured into a pit of bentonite clay silt. As the bronze comes into contact with moisture, the metal violently displaces the water and finds its way into the crevices between the pieces of clay, eventually hardening and resulting in unpredictable and abstract forms.

Six of the water casting sculptures will be on view at Regen Projects, while the remaining eight will be on view at the Museum of Contemporary Art, Los Angeles (MOCA) in the exhibition “Matthew Barney: River of Fundament,” the artist’s first solo museum presentation in Los Angeles (September 13, 2015 – January 18, 2016). Regen Projects will also exhibit a suite of engravings on bronze with gold plating. These drawings explore the sites and themes of “River of Fundament”, linking them to the narratives that arise from the casting process.

Matthew Barney (b. 1967 in San Francisco) lives and works in New York. He has been included in numerous group exhibitions such as Documenta IX, Kassel, Germany; the 1993 and 1995 Whitney Biennials; and the 1993 and 2004 Venice Biennales. Solo exhibitions include The CREMASTER Cycle (2002-03), Guggenheim Museum, New York [traveled to the Museum Ludwig, Cologne and the Musée d’Art Moderne de la Ville de Paris]; DRAWING RESTRAINT, SFMOMA; “Prayer Sheet with the Wound and the Nail”, Schaulager/Laurenz Foundation, Basel (2010); and “Subliming Vessel: The Drawings of Matthew Barney”, Morgan Library, New York and the Bibliothèque nationale de France, Paris (2013). Barney has received numerous awards, including the Aperto prize at the 1993 Venice Biennale; the Hugo Boss Award (1996); the Kaiser Ring Award (1997); and the San Francisco International Film Festival’s Persistence of Vision Award (2011).